7 replies to this topic

I'm taking the plunge and starting this thread to cover my painitng of my dwarf army.
My plan is to cover all the old models I have done so far since i was 12, posting the pictures in the order they were completed so you can see my improvement.

Hopefully I'll get all those old models posted pronto, and then i can move onto finishing the models that are currently WIP (work in progress)
I think i've actualy improved a lot in painting (knowledge at least) since I base coated my curent WIPs, so then it will be interesting to start new things from Scratch.
This might just time with the new dwarf release who knows

Ok - photos are on the way.
Please bear in mind that the first lot were done around 1990. Yes i was inspired by Wayne England's blue and white colour scheme in WD, and yes I didn't have many nice paints back then

(no dwarfs in that game, only yorldles!)

I'm in a similar position, some models i've had and played with for yeeeeeeears I have never got around to painting because I'd get something new and paint that instead.

Hats off to you for crowd-sourcing encouragement!

Yet another Wayne England fan, he really does have a lot to answer for

Perhaps we should send a collective plea to GW to do a re-visit to his army.

You've certainly come to the right place, I'm sure the brewery members, especially those of the older metalheads variety, will offer you plenty of encouragement.

How big a project do you have ahead of you?

Hey, great to hear about your project, looking forward to the pics

These were the first models I painted for the army. Wayne England had said he was choosing blue for his army colour and so blue would appear on every unit somewhere. So that's what I decided to do too.
Since his first unit used white as a second colour, and since I thought it looked nice, i copied that for this first unit too

I'll find the unit champion model I have for these models soon too.

I did the base this year.

Here you go: (HOW do I make the image appear in here as part of the thread? 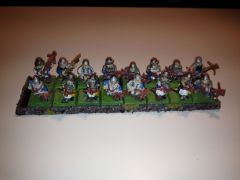 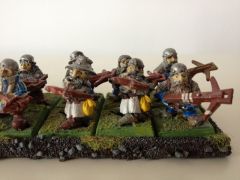 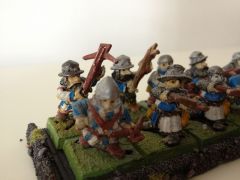 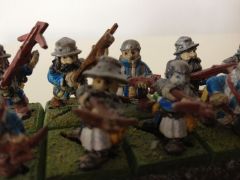 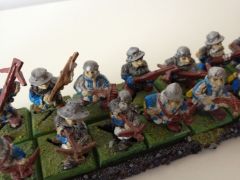 In answer to your question about posting pictures, I just use the picture of the tree button (on the second row), and insert the link to the picture from your gallery.

On to the models. Love these models, as many do. I assume it was the movement tray that you painted? It looks good will fit well for Dwarfs. Are you planning on repainting these models?

to direct link images you need to host them on a image board like image shack or photobucket. when you upload onto those sites, you get link options tothe photos, choose he direct link in share options and copy it here after you click the tree picture in the reply options.

if im not making sense im drunk so yesh

Also tagged with one or more of these keywords: army, oop, painting