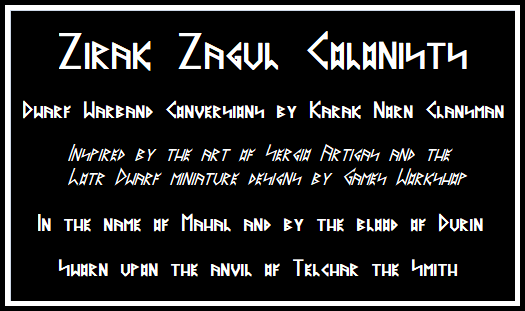 "Seven rings for the Dwarf-lords in their halls of stone."

Greetings, wanderer! Welcome, by blasts of horn and meaty fat sizzling in the fire, to the newly carved halls of Zirak Zagul, a budding hold of Khazâd settlers of Ironfist extraction. Warlike and quarrelsome, the teeming numbers of their expanding mother hold saw an intrepid group of colonists split off to seek untapped ore veins and spread Dwarven might to new locales. Their mythical maker, Mahal, created the Khazâd to be tough and strong in order to withstand the baleful horrors and hardships of a hostile world. For Ages, these traits have stood the Dwarves in good stead, allowing them to endure, outlast and ultimately overcome their hated foes. Yet the true wonder of the Seven Houses of the Dwarves are to be seen in the crafty works of their hands, working magic on metal and stone beyond the dull ken of manlings. To the heirs of Durin, the mountain sing with marvellous potential. The raw metal speaks to them of true wonders to be wrought upon the anvil. And so the hardy Khazâd raise hammer, axe and mining picks alike, and set about their wondrous toil. Such works! Such unsurpassed carving of stone! Such unparallelled forging of metal!

Truly, the Dwarves themselves are the greatest treasure, the makers of such riches and wonders sung of in sagas and disbelieved by dull folk. And so the Khazâd will guard their hoards and their kin with ferocious vengeance promised to anyone who so ever dares to challenge them.

Two weeks ago, amid frugal Christmas present-making (as befits a Dwarven tightwad), Johan von Elak, a friend of mine, decided that we should meet up in the days between Christmas and New Year, and play Lotr Strategy Battle Game. He had been introduced to the system by a friend, and fell for it. Having tried Lotr SBG, he wondered why he had played clunky Warhammer with its bloated mass of special rules all these years, when such an elegant fantasy wargame existed.

Be that as it may, me and my brother were fired up with enthusiasm. We have collected Lotr for as long as we have collected Warhammer, and the wonderful miniatures and especially Games Workshop's homebrew designs for Lotr (Dwarves, Khand, Easterling Cataphracts and so on) have long captured our imagination. The Perry twins truly know their craft, and they gave us a phenomenal model range to crown their work for Games Workshop before they took their leave to focus on their own historical range. Yet Lotr players around here are few and far between, and no tournament has ever been sighted. As such, our modelling efforts have by necessity become concentrated on Warhammer Fantasy and Warhammer 40'000, which do have players and tournaments. Absolutely lovely as those settings and miniatures are, this has still left us longing for Lotr, even as we piled the boxes and blisters of our Lotr collection higher.

And so, after 18 years in the hobby, we at last have found opponents and a communal drive to convert and paint our Lord of the Rings miniatures!

While Johan goes for the elite forces of Mordor, and my brother paints Easterlings, I have spent at least 8 days of nonstop work from morning to midnight on converting my Dwarven warband for the Christmas games to come, based on the rather shoddy plastic kits. Painting will happen in preparation for some later Lotr event, and so I present to you pictures of these finished conversions. Time was short, and so I declined to work in all the angularities and intricacies I would have loved to do. Drawing inspiration from Games Workshop's own Lotr Dwarf range and from the splendid artworks of Sergio Artigas, I set about decorating the Dwarves. Most importantly, I went for my lifelong love of realism details, and frontloaded their equipment. I also drew on certain Warhammer Dwarf designs such as ancestor faces, because good designs should span settings and not be confined in their outreach.

It is far from perfect work, yet it was not meant to be anything else than fast work, though still completionist in scope of equipment and decorations. These are just quicksculpted personal conversions, not sculpts for casting.

In the process I also happened upon a simple method to give a base for making flapping cloaks, involving plasticard, pinned paper clips, super glue and baking soda. A tutorial can be arranged if the below work in process pictures do not suffice for an explanation: Say the word!

It is so good to at last be back not only to true Dwarven hobby work, but also to Lotr.

And now, heed the blasts of horn! 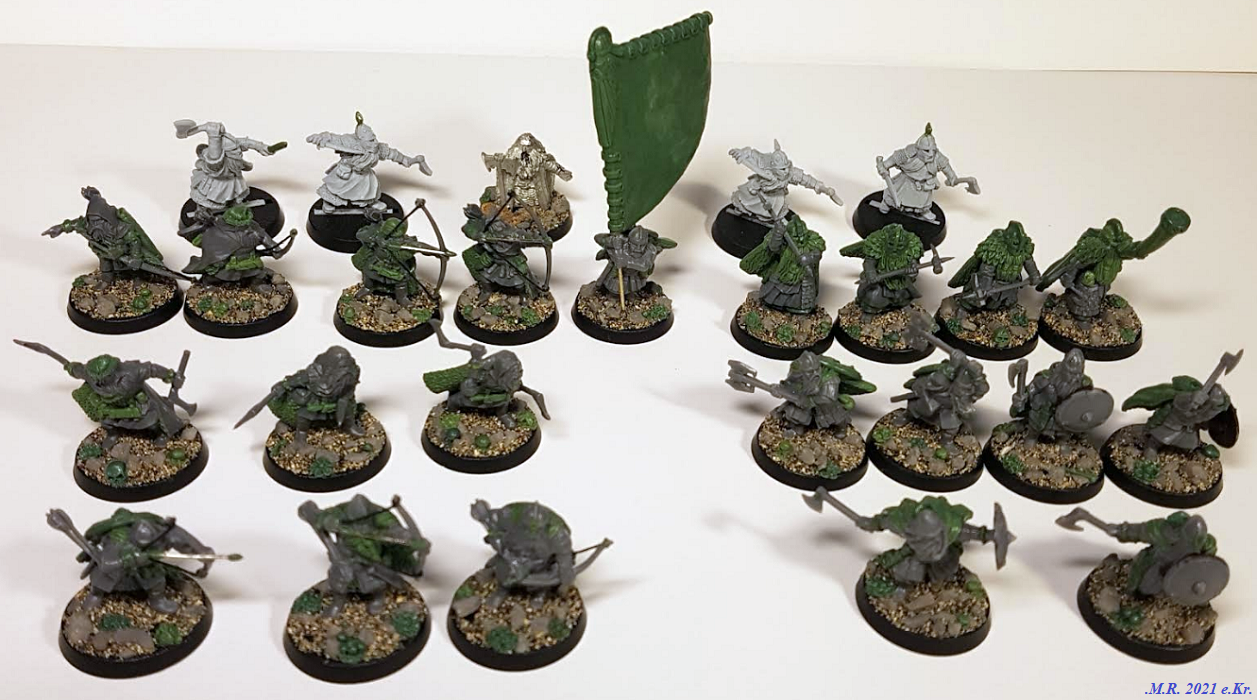 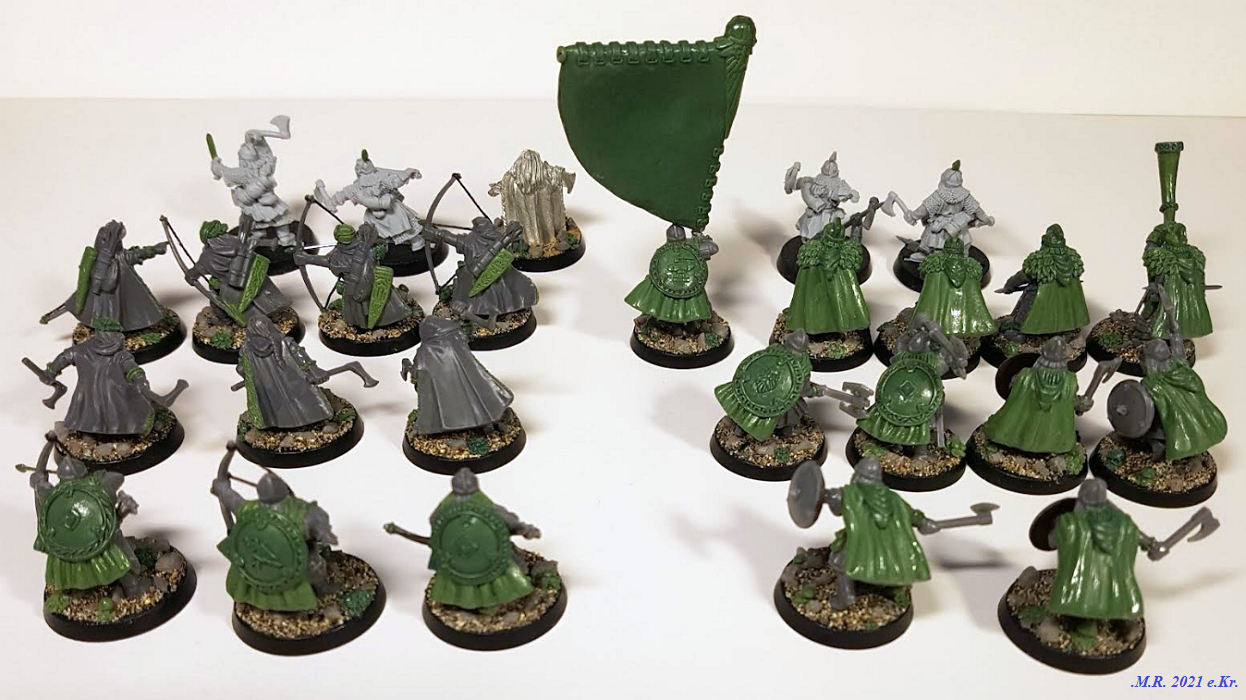 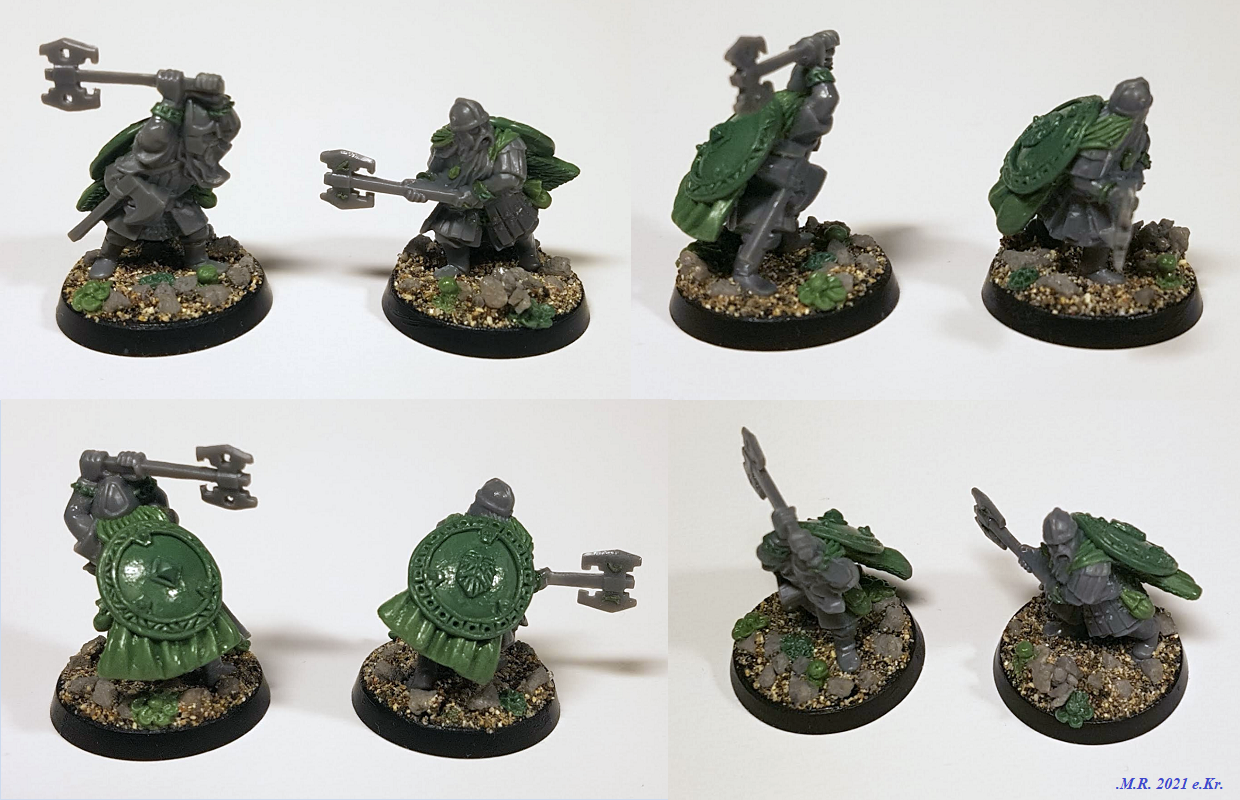 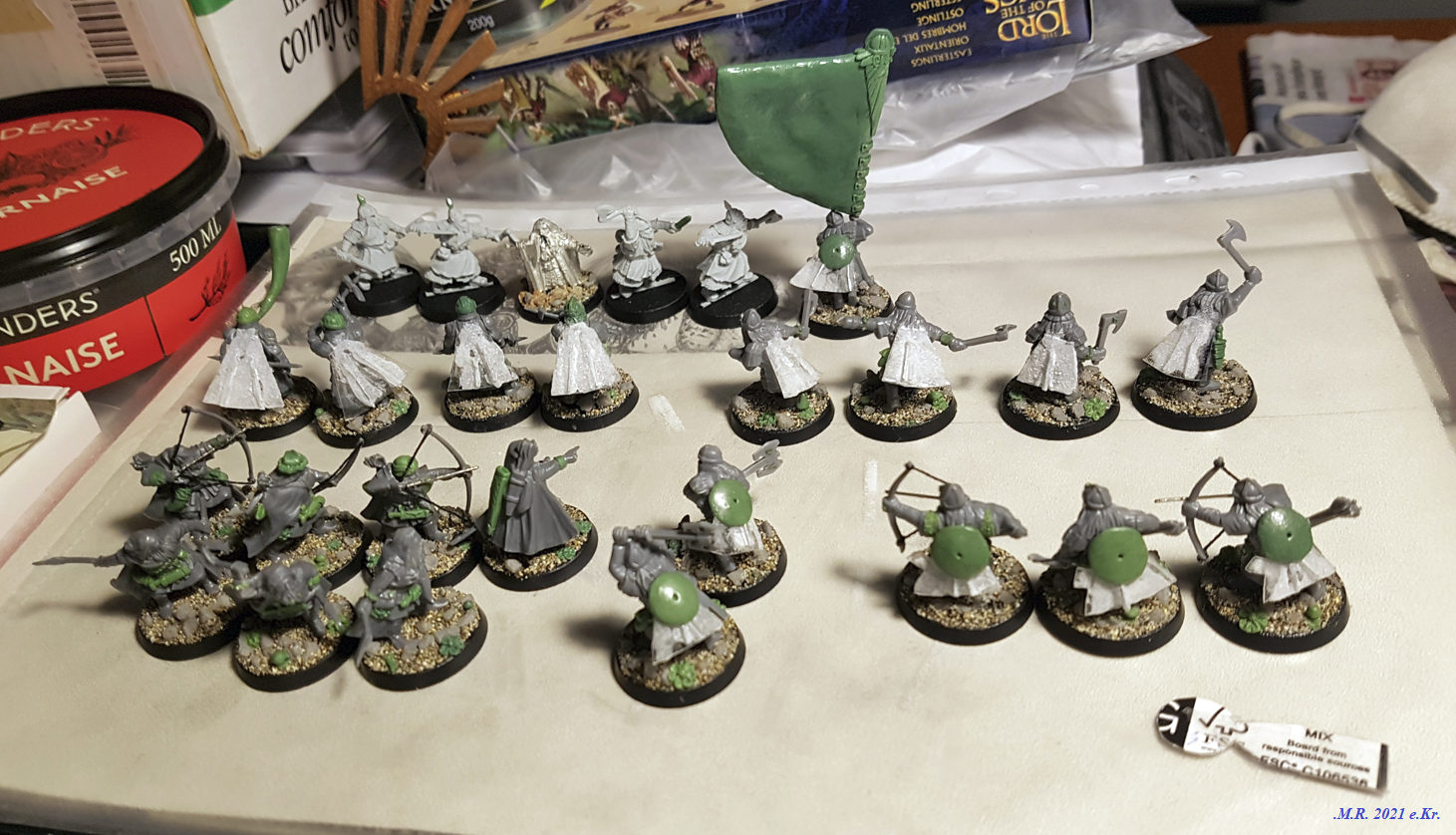 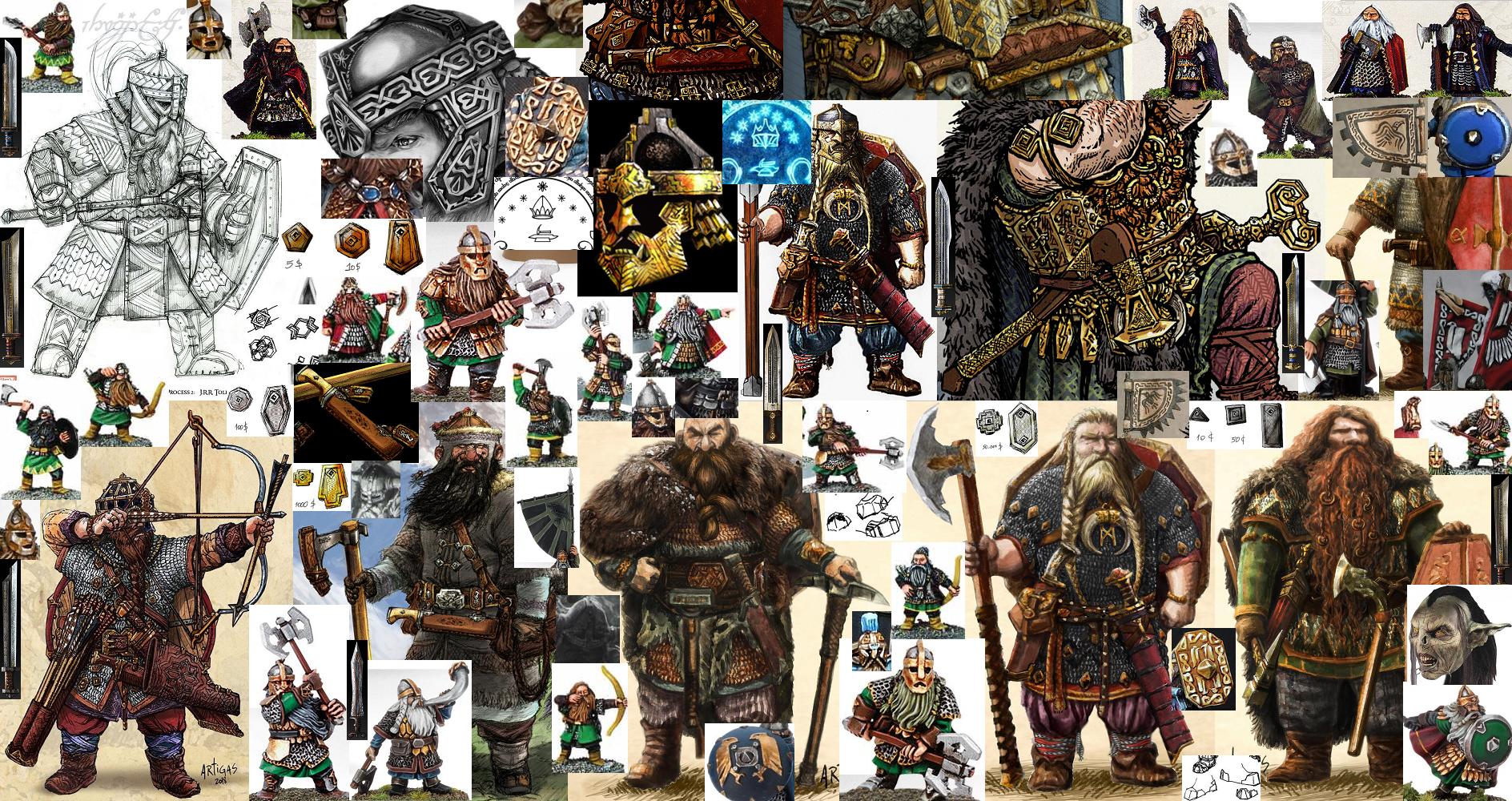 Amazing conversions! Good luck with the coming games, may the dwarves crush the dark forces coming from the south and from the east.

Dead leaves rustled and gravel crunched underfoot as the Dwarf archer Taghimbur, son of Taghimbrak, jogged up the barren mountain slope. The large roundshield strapped to the bowman's back bumped against his leather gambeson and sent tugging ripples through the fur-lined blue cloak that adorned all proud denizens of their young colonial hold. Taghimbur raised a thick, ruddy hand and sent off a sequence of signals with his calloused fingers. The archer avoided shouting, since the acoustics of this particular mountainside could have carried a cry far and wide, to whatever hostile ears might listen out there. The vista alone was impressive, with an unclouded sun embracing mountains, foothills, forests and streams with its golden rays. Herds of mountain goats could be seen grazing, while birds circled overhead. The golden orb in the sky vault illuminated glimpses of a vast inland sea to the east, even as it cast its shine over the rolling hills and plains of Rhôvanion to the west.

The son of Taghimbrak motioned again with his right hand, his craftsman fingers repeating the signals. Soon, a stout warrior armoured in stainless bronze on top of a steel maille suit rose from a depression in the ground, having hidden out of sight amid blueberry plants and rugged stones. He used his great axe to lever himself upright, and waved the archer closer. Taghimbur approached, and hopped down into the depression, sliding on little stones and landing on a patch of bleak, green moss. His sleep-deprived eyes looked up to the axeman.

"Thurlak's rangers have spotted foemen on the goat paths to east-southeast," reported Taghimbur. "Rhûnnic manlings, well armoured and marching in cohesion. Half a day's march from here. Heavy infantry only. They appear to be a small replacement garrison for one of their outlying fortlets, one who has taken a strange detour. Some herdsmen or other must have discovered our tracks and told them. The Easterlings must be searching for us, else they would not have any errand in such barren parts. They are all creatures of the watered lowlands, manlings."

Zirak Zagul's little prospecting expedition to the mountains west of lake Rhûnaer was heavily armed, and over a quarter of all the Khazâd participating in it were rangers, well practiced in traversing and reading the greenery and landscape of the surface world. Such precautions were proving wise. Without the Dwarven rangers scouting ahead, the expedition would wander without eyes and ears into every peril on their journey.

"Your words have been heard," replied Khrake, son of Byrnok. "Torik's band of bushwackers have reported a column of Mordor Orcs approaching through the northwestern defile. A full day's march from us. Pincer. Run to Thurlak and call back his woodsfolk to the basecamp. I will bring your tidings to Fibur. His is the call, for where to strike, for where to lay an ambush. Fear not. We will slay them all in detail, and your arrows will catch any longshanks who routs. We'll divide and conquer them."

"We will. May your axe taste blood. By Durin's beard."

The Dwarrows departed. Taghimbur leapt up and returned from whence he came, scanning the surroundings with suspicious eyes. Jogging in the other direction, Khrake savoured the anticipation of upcoming bloodshed. They needed to strike swiftly, or be enveloped. Depending on Thane Fibur's decision, the eager warrior could look forward to either a red dusk, or a crimson dawn. Khrake let out a savage smile. The wary foe favoured them with war. He and his kin were sure to repay the favour with a vengeance.

A guttural laughter escaped his throat.

The axes of the Dwarves would soon be upon them!

When I last painted my Warhammer Dwarfs of Karak Norn and similarly blue-red coloured Lotr Dwarves over twelve years ago (hobby work on my friends' and brother's stuff, plus Chaos Dwarfs, Squats and sculpting for casting has kept me away from my core love in the hobby), I was relying upon a black undercoat and inks, with careful highlighting. This took time to paint but delivered stark results. The problem is that most of our Citadel inks have been used up, spilled or dried up, and no replacement inks can deliver the same strong results. As such, I tried to approximate my usual painting style as best as I could with washes (lovely paints, by the way). This proved tricky, since several of my staple paints were either half dry, or out of commission and in need of replacement shopping.

As such, instead of Shadow Grey and its current equivalents, I had to mix dark grey and blue for my blue-grey bases. Likewise, I had to skip Ice Blue/Lightning blue (although I did find a bottle of the latter after highlighting all the blue, fresh and good to use), and applied Space Wolves Grey straight onto Enchanted blue, hoping to pull it together with blue wash. The most time-consuming challenge was the state of my dried up Shining Gold. I considered mixing Mithril Silver into Gehenna's Gold, but noticed that the clumsy dried-but-water-mixed Burnished Gold could still be used for highlights, with a lot of patience. Most colours I highlighted up to their starkest (orange for red, Bleached Bone for skin and so on), and then pulled the bright highlights into the base colours with a wash (red-brown Reikland Flesh for both skin and red cloth, for instance). All bronze/gold and iron/silver areas were given a re-highlighting, but this time I refrained from re-highlighting the entire model after washing/inking as I always used to do, because while it delivered crisp results, it also took a lot of time to pull off. If I shall have any hope of ever fielding a fully painted warband, I need to cut down on re-highlighting after applying washes.

The result is sufficiently close to my usual way of painting Dwarves, with washes instead of inks and a lot less of re-highlighting.

These two test pilots of painting have their names written in the runic Dwarf alphabet/futhark found in Shadow and Flames. 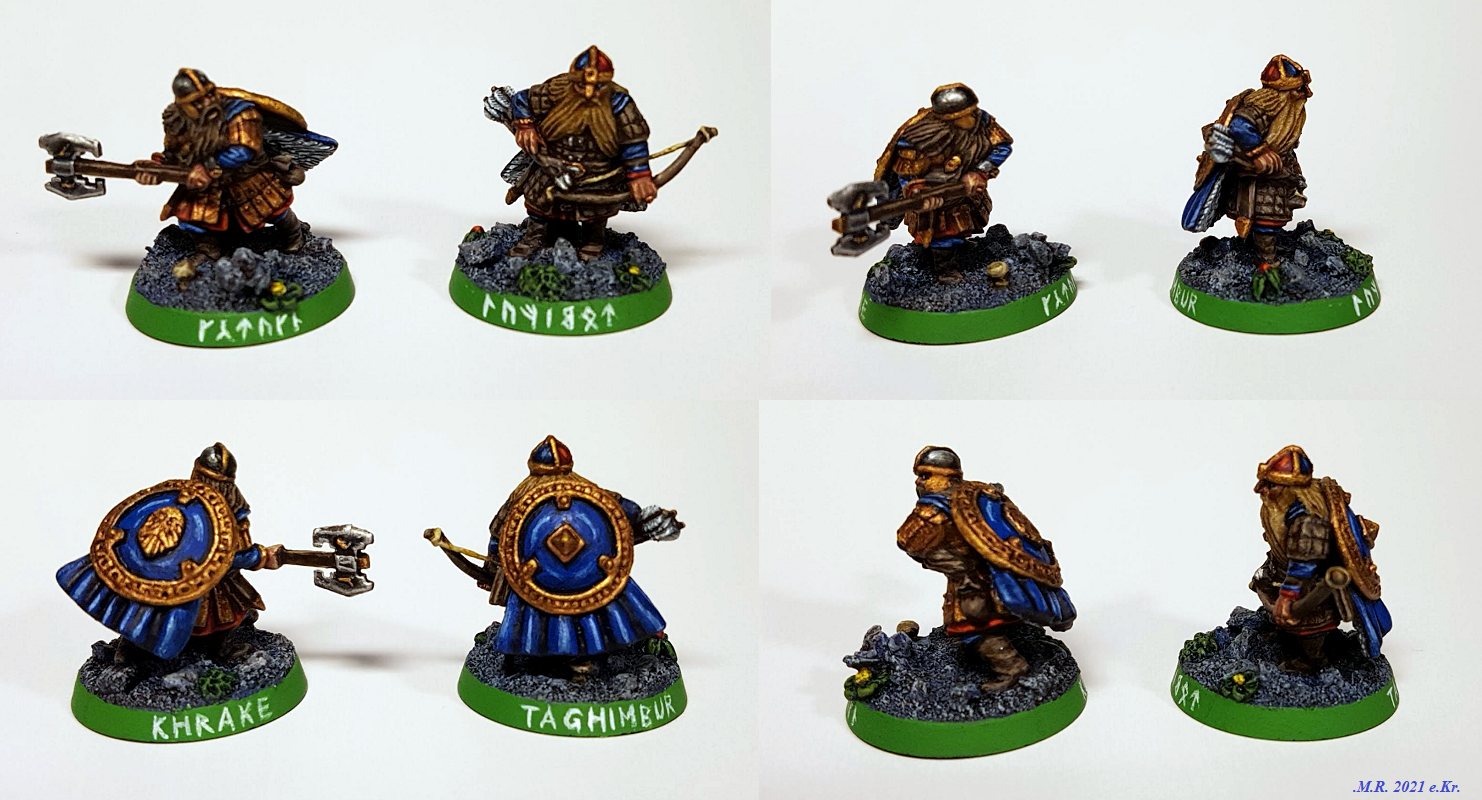 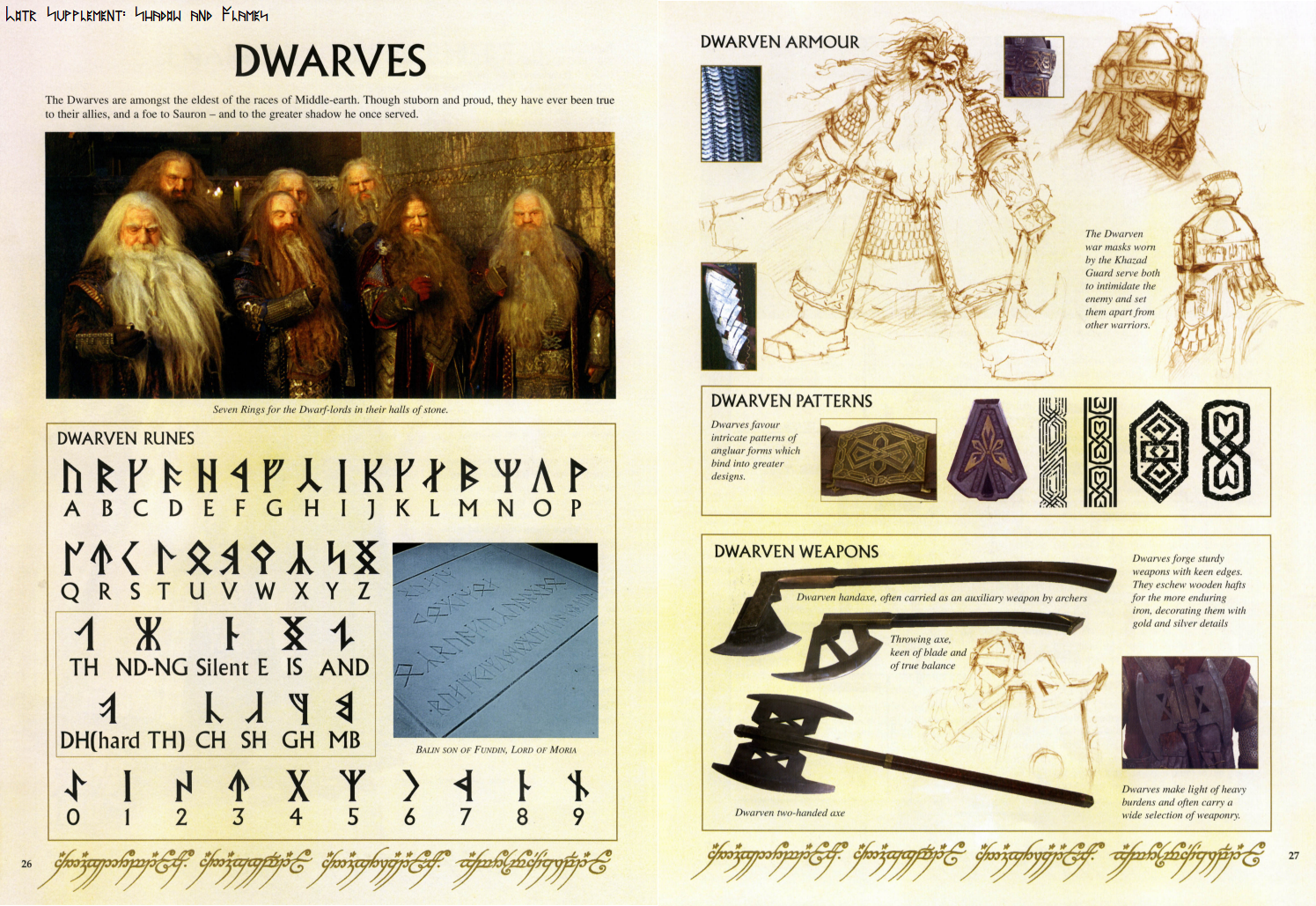 Also tagged with one or more of these keywords: knc, lotr, dwarves