T9A: Cave Dwarves Of The Mountains Of Gold 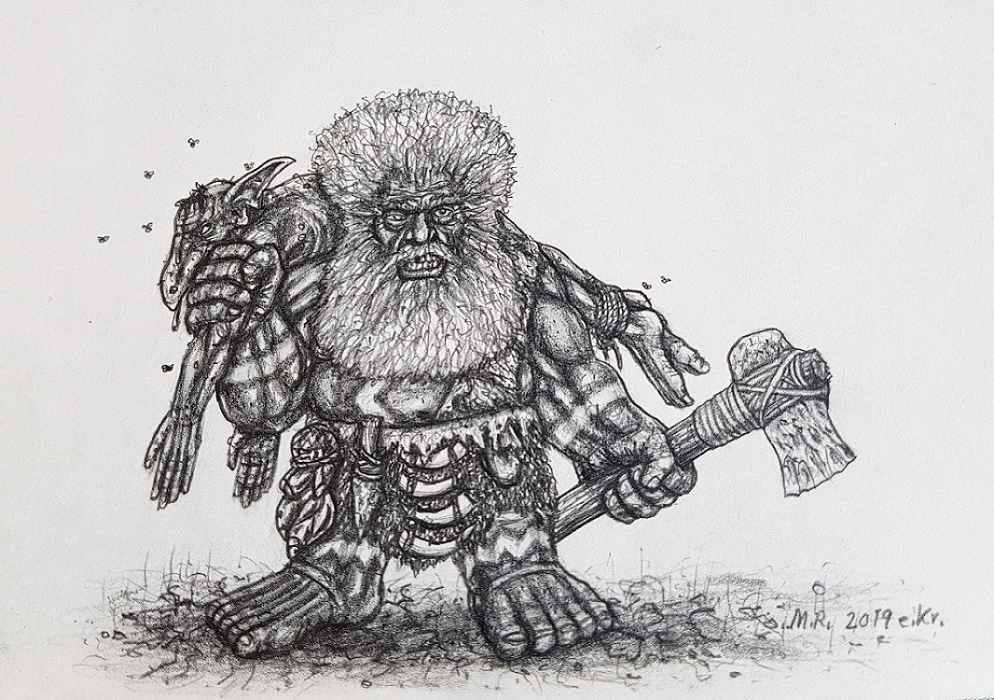 Cave Dwarf of the Mountains of Gold
Ladies and gentlemen, welcome to the campfire! How about a cup of Stone Age?
When I first glimpsed this brainstorming map for Taphrian factions here, my initial thought was roughly: "Hell no to Cave Dwarves in Kegiz Gavem! No wasting opportunity with Neolithic primitives. This will be fantasy Ethiopia in advanced splendour or bust, worthy of true Dwarves."
Still, the general idea of Cave Dwarves (with all the connotations of caveman as part of the deal) isn't without merit. It's just one that is fit for some real isolated obscure remnant duty, on whatever continent happens to fit. The above doodle is loosely inspired by Lorenz Frølich's Two Völuspá Dwarves and Sergio Artigas' subsequent Primitive Dwarves artwork. As a starting point, this is not a culture based upon any particular one in recorded history, but is instead a reference to prehistorical humans (of all species) in general, and to finds of prehistorical humans from South Africa to Ethiopia in particular. The Mountains of Gold in southern Taphria lacks a mention of Dwarven presence, and this will not do, so I propose that here is where we plant our Cave Dwarves.

The basic concept is one of a small Dwarf remnant left over from either the First Age (end of mining slavery under Saurian Ancient mastery - possibly with extermination campaigns launched from Nsisiboko to purge the nearby Mountains of Gold from all rebellious Dwarf slaves) or Fourth Age (fall of Holds). Possibly originating from a single family unit hidden away in caverns, this bottleneck event saw a virtually complete loss of accumulated knowledge and crafts, a slate wiped clean. These were the origins of the Cave Dwarves,whose existence is unknown in nought but travellers' rumours even in the closest of grand Dwarven Holds, namely Kegiz Gavem up in the Mountains of the Moon. The Cave Dwarves are a lost folk of savages to the outside world, highly reclusive and living in nigh-inaccessible parts of the Mountains of Gold and their cave systems. It is unknown why these of all the world's Dwarrows have stayed at such a primitive level of crafts, yet even their seeming wretchedness harbour a fine hand at stone tool carving, and the shaping of ancestor figurines from various kinds of rock or even nuggets of gold. This peculiar remnant seem absorbed by a life amid stone, and have a spiritual affinity in tune with the heart of the mountain, the lore of which is shrouded in mystery. A few wild tales of wanderers even speak of very rough beings made out of almost unworked stone. Others speak of cavernous cannibals little better than the most feral of Orcs and Goblins, with a passion for hunting that is only matched by their ferocity.
And so the Cave Dwarves eke out their taboo-regulated existence in kingroups, remaining virtually unknown, a curious relic from truly olden times trapped - or mayhap blessed - in remotest isolation.
Please share your own ideas, thoughts and criticism.

As for the cave dwarves they could have a lot of javelin type weaponry. Maybe a very crude javelin thrower just using the elasticity of animal hide to inaccurately launch a sharp stick with an obsidian shard on the end. They could also have a tribal, violent system of leadership. Where the strongest one semi leads them and if a stronger one challenges him they can take leadership. There is a lot that can be done with cavemen and I think they are a good idea for dwarves. They could also chuck flint shards through the air to try to kill their enemies.