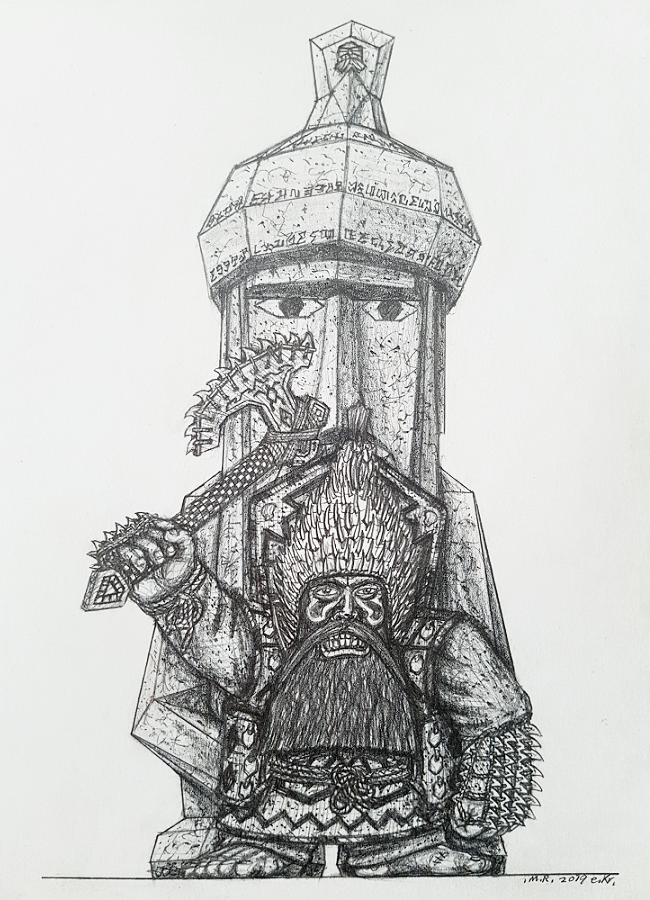 Lost Islander Dwarf
My colleague Tjub (of the Tjublings) wanted me to draw a south sea dwarf, and so here it is! The islands of the Pacific Ocean is not the first place one would think of Dwarves for, when converting real world history to fantasy, yet the famous Rapa Nui of Easter Island did carve (and transport) Moai statues out of stone, so they, if anyone, will serve for Dwarf duty. A good distance to the west of Easter Island lie the Kiribati islands, of which the warriors of Gilbert Islands were famous for their armour (overall and cuirass) woven out of coconut fibres, which protected the warrior elite against sharp tooth weaponry during ritualized combats which were not supposed to end in the death of the enemy (which would incur a fine of lost land for the killer). The warriors also wore porcupinefish headgear to top it all off. This exotic wargear required some skilled craftsmanship to produce, which is ever a must with Dwarves. And so I present to you this concept of the Dwarves of the Lost Islands, stranded out at sea to the west of Virentia:
While by far the most of the scattered islands of the giant ocea between Augea and Virentia-Silexia are inhabited by Humans (or other sentients), a corner of this vast sea harbour a pecularity which will surprise any explorer that ever happens to come upon it. For thrown out far from land and far from other isles are to be found the Lost Islands, formed in bygone eons by volcanoes. These volcanoes deposited some rich mineral deposits on some of the islands, which the world-dominant Saurian Ancients sought to exploit during the long First Age. As such the reptilian overlords imported Dwarves from their breeding pens and silver mines in Virentia's Wrathful Mountains, and set about strip-mining the ores and gemstones. This mining operation was carried out with great investments and vigourous slavedriving, and as the skyhammer fell, the underground of the islands were all but empty of minerals. The thunderous impact of the distant comet reverberated the world over, and under the Lost Islands it pulled out reinforced masonry that held back the sea.
Enormous quantities of water crashed into the mining tunnels and devoured almost everything and everyone left down there, drowning both master and slave and dashing their corpses against the rock. Yet some Dwarven slaves survived above ground, and some others managed to find shelter in underground caves into which the water could not rise, and then succeeded in swimming out from these pockets of air. The lucky divers emerged and set their brethren above ground free, and together they drove the remaining Saurians to extinction in a vicious series of running battles. Yet this celebrated victory was also the beginning of everlasting woes, for these wayward Dwarves were lost far out at sea, with no mountains in sight and no metal to mine and forge. Thus began their long isolation, during which the Lost Islanders made do with the materials at hand, and after a fashion they crafted their items with such raw materials as coconut fibre, wood, stone, shells and shark teeth.
Although the sun warms well, in their Dwarven hearts lurks an eternal yearning for mountains, and their songs tell of their longing and plight, and their stories are filled with wondrous lands beyond the horizon, which they however cannot in reality reach.
Reference images: 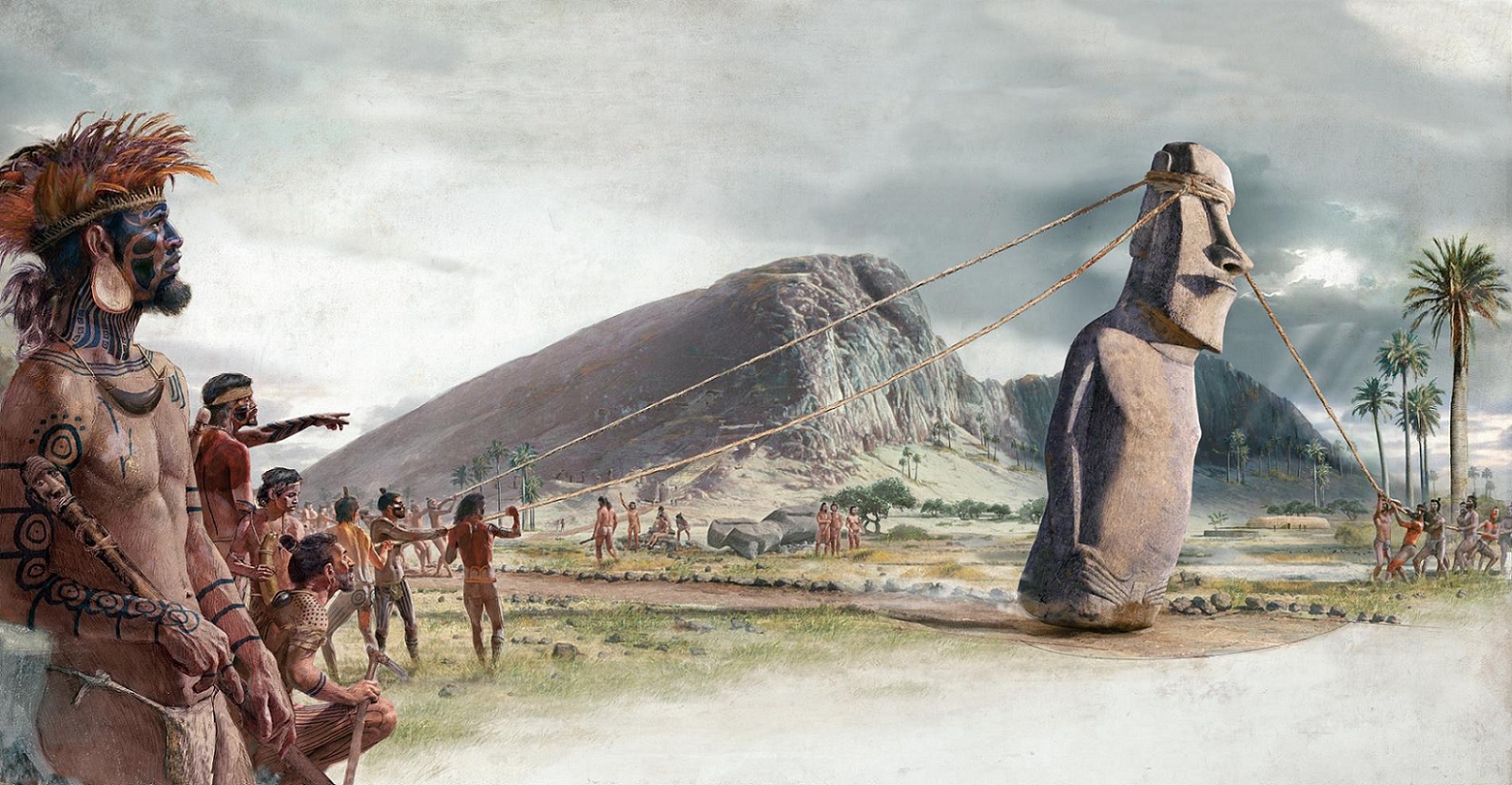 Prince of Spires over on Ulthuan.net had this idea to share:

These dwarves are just crying out to be using Rai stones as their currency.

The Micronesian island of Yap is known for its stone money, known as Rai, or Fei: large doughnut-shaped, carved disks of (usually) calcite, up to 4 m (12 ft) in diameter (most are much smaller). The smallest can be as little as 3.5 centimetres (1.4 in) in diameter.[1] Rai, or stone money (Yapese: raay[2]), are more than 6,000[3] large, circular stone disks carved out of limestone formed from aragonite and calcite crystals.[4] Rai stones were quarried on several of the Micronesian islands, mainly Palau,[5] but briefly on Guam as well, and transported to Yap for use as money. They have been used in trade by the Yapese as a form of currency.
The monetary system of Yap relies on an oral history of ownership. Because these stones are too large to move, buying an item with one simply involves agreeing that the ownership has changed. As long as the transaction is recorded in the oral history, it will now be owned by the person to whom it is passed and no physical movement of the stone is required.


Everything about it just fits dwarves. Made of stone. Based on tradition and history. Impractical.

It feels very Dwarfish to use a stone sunk to the bottom of the sea somewhere as a piece of currency, where it is used by orally passing it along without moving it.

Then again, thinking about it. This could of course be used as money for all dwarves everywhere.

Warhammer-Fan over on Deviantart had an idea for this corner of the equivalent of the Pacific Ocean:

I can't draw for "I Swear too much", but I can brainstorm. Remember the Pacific Islander Dwarves? Well, what about making the Goblins they fight like the Coconut-wearing creatures in Moana? Goblins wearing purple-painted coconut armor, who sail in massive ramshackle boats? 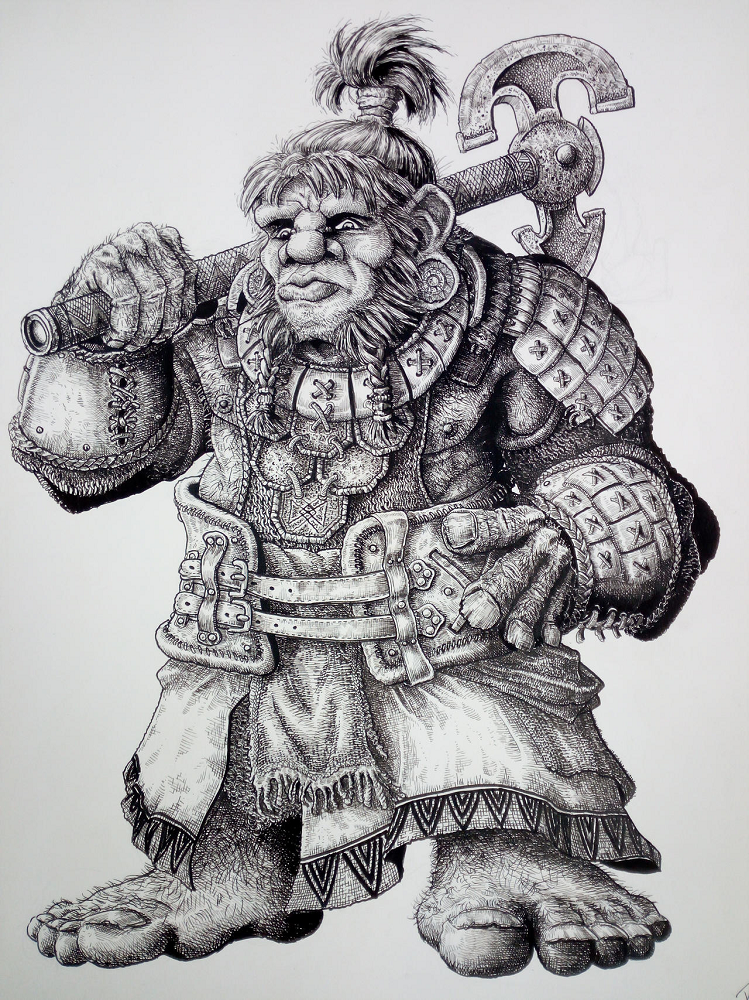 Artwork by DracarysDrekkar7, being a fantasy Lost Islander Dwarf concept for the Ninth Age. This artist has a deft hand at illustrating fantasy, capturing both an impression of rugged life and craft refinement in fine detail. Check out the ear ornaments, the knuckles and the axehead in particular!

And do check out his Deviantart gallery and leave him a comment!

Also tagged with one or more of these keywords: knc, t9a, easter, rapa, nui, lustria, sea, island, isle, of