8 replies to this topic

Chaos Dwarfs Online presents: Scribe's Contest I
Welcome to the first of many fluff writing competitions to be hosted by Chaos Dwarfs Online! They are sponsored primarily by Titan Wargames and are always themed around Chaos Dwarfs.
This round's theme is Chaos Dwarf Infamous Quotes. These don't have to be Dawi Zharr or Hobgoblin words, but could also be quotes about Chaos Dwarfs as expressed by other races of the Warhammer world.
Do you like fluff, minis and medals? Perhaps you even like Sneaky Gitz, big hats, masks, flying bulls and curly beards? Then don't miss the chance to participate in this new fluff contest marathon!
Please read the general rules and guidelines before diving in, though. The guidelines contain a bunch of inspirational material to aid any participants.

Interesting! I'll see if I wont participate, altough I'm not entirely sure what the hold of Kaz a Ril thinks of the Chaos Dwarves. In fact, I'm sure they'd not rather think about them at all!

You could enter with your hold's curses upon their corrupted brethren.

Voting thread is up! There'll be more contests to come soon.

Scribe's Contest V: Blackest Infamy - Chaos Dwarfs in the Eyes of Others is up!
Give us your view on those evil stunties, and don't hesitate to be snarky about it!

Scribe's Contest VI: Tales of Darkness - Chaos Dwarf Myths & Legends is go!
Give us your take on their malicious mythology, and have a chance to win an Animated Dwarf Statue of Ancient Times miniature! Otherwise available on Warseer and CDO.

Scribe's Contest VII * Sports Edition *: Foul and Fumbles - Blood Bowl Chaos Dwarfs is up now! Deadline 24th of April, so move, move move!
"Goooaaal! It's a GOAL! A bloody, magnificient unparallelled goal! G-o-a-l-err-h! Did you see that, Ham?"
"Sure did, Krogg. Straight out of textbook."
"Cheatnote, rather, by the look of those fans. They're all jumping onto the pitch!"
"Hahaha, now look at that Hobgoblin run! Silly stuff. Ouch! One moment scoring, the next dead."
"Well, so is Blood Bowl, Ham."
"Indeed, Krogg! The fans have both teams surrounded, but why are the mobs attacking their own teams...?"
"Duck! Now they're throwing Gnoblars!"
"Watchout!"
"There went the cheerleaders! Yuck!"
"It's doom on the pitch today. Havoc! Bloody mayhem!"
"Sure is, Krogg."
"Now the referee's gone. In four different directions at once. Oooh, pretty nice quartering there by those Amazon fans!"
"For sure! An' do you know what those curses and obscenities are? Those vomited from tusked mouths, like that sod's blood 'n' guts spewed all over his curlybeard? D'you know what them acid words are, Krogg?"
"No, tell me, Ham!"
"Those are the last words of the players..."

Scribes Contest IX: Farflung Strongholds - Distance in the Chaos Dwarf Empire is up!
Share your vision of the vastness of the Chaos Dwarf empire and get a chance to win some Dungeon Clutter from Zealot Miniatures: 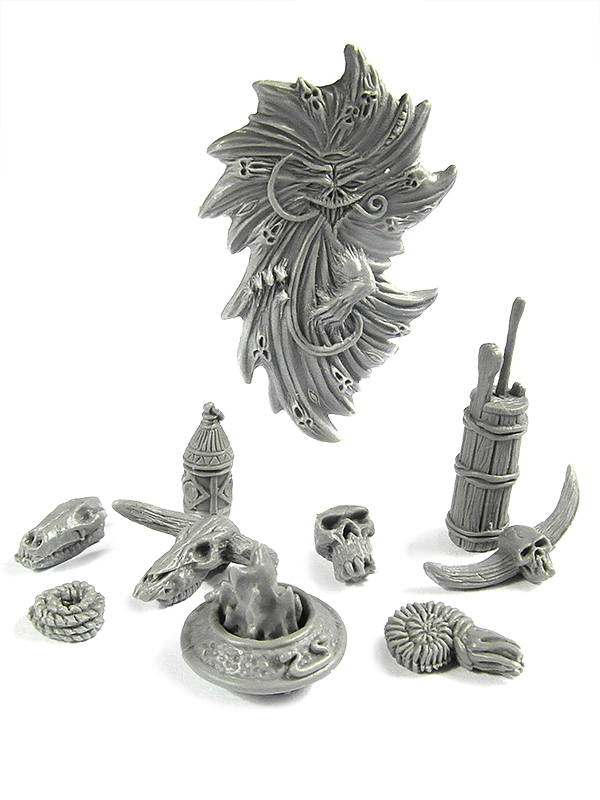 Scribe's Contest X: The True Nature of the Father of Darkness
It's a-go! Prize from Admiralty Miniatures is one Four Reliefs wall plate: Scribe's Contest XI: A Harsh Music - Temple Song Lyrics
It's on! One entrant (regardless of who wins) will be picked for music production, though the lyrics may be tampered with for artistic reasons. Immortalize your lyric text in metal song.