195 replies to this topic

Thanks to you all regarding my norse dwarfs - glad you like them and encouragement is always appreciated! Tankards all round!

For the first time in a long while I have put paint to model! To get back into painting I've gone back to the Avatars-of-War rangers (or ranger - singular) so no greenstuff work (just a cheeky axe swap).

Apologies for the poor quality and lighting of the photos - I aim to take some better ones (including shots with the other rangers) soon! I've really enjoyed working on this guy - I gave extra attention to his face (often a weak point in my painting) by trying to add dark bags under his eyes and define the facial features better. Technically speaking I feel he's perhaps my best ranger to date - though he took much longer than he should have for a rank and file (I'll get to a unit of ten eventually!!!) - Hope you like him!

And below are a couple of images of concepts I've been playing around with - mainly blutac for now and still requiring some parts (and greenstuff) but they give you the idea.

^Above, partly imspired by the excellent conversions that cropped up during the End Times as well as him being a legendary lord in the upcoming Total War: Warhammer game, here's a concept for Ungrim Ironfist using an array of bits and pieces (primarily Fyreslyar Auric Runeson).

All he needs really is some greenstuff chainmail and a drake cloak (possibly a dark elf corsair one if I can source one) - I tried to have the axe over the shoulder like the amazing armybook artwork but with the mohawk compositionally it doesn't line up well. I am wondering however whether to go ahead with him as Ungrim or weather to lose the mohawk, give him a more norse helm, maybe a shield and a wolf pelt and make him into a big burly lord (he stands quite a bit taller than my other dwarfs...)

What do you guys think? Ungrim or Norse Lord?

^ And finally a WIP conversion for a runelord with his Anvil of Doom using the GW dragon slayer as the basis. I've been meaning to re-do the anvil for a long time (it was painted perhaps 14 years ago when I was 10 - well worth a touch up) and I'd like to give it new attendants to fit my force's aesthetic (though I'll salvage Thorek and use him as a standalone thane or runesmith).

Playing with the idea of using object source lighting, perhaps even in two places - the smouldering rune glowing hot on the anvil and lighting the features of his face, with a blue runic glow from the hammer above lighting up his shoulders/armour/cloak (to be added). Presents another painting challenge and progression and could lead to an atmospheric centrepiece for the force. I had contemplated using Belegar's hammer but think it's on the large side for a smith - the current one above is taken from the runesmith kit's off-hand weapon.

Hope you like this update - they are few and far between currently due to work/life etc. but I hope to keep progressing along!

good idea on the converstion... can not wait to see them finished.... have a tankard on my tab.

Cool stuff guy! I really like your nordic dwarven conversions

the ranger is very nice.

Great models you have created! especially the warriors. Excellent job

Thanks for all the responses guys! Glad you like them!

Just a quick update with some very (VERY) rough WIP norse dwarf hammerers I mocked up this morning, just playing around with bits and blutac. They consist of Avatars of War berserker bodies (like my warriors), white lion cloaks with ironbreaker helmets and shields. I think I will remove the armoured plates on the beards and either tidy up with greenstuff, replace with another beard (like my first warrior) or even begin sculpting them, so they're just helms with eyeguards.

There's quite a bit of sculpting to do, I think they'll have chainmail hauberks and the cloaks need neatening where they join the body. Also contemplating putting some scales on the shields like the description of the shields of the king's guard in Kraka Draka in Skull Crusher's writings in Preacher's Corner.

The aim is for any bare headed warriors in the unit to have their helmet about their person somewhere - I'm also going to try and have each hammerer have a different hammer, so acquiring them from various kits (including some new 40k Wulfen hammers inbound) to emulate that these hammers have been passed on from hammerer to hammerer. Lots of work to do them though so won't be painted for a while most likely (along with other conversions in the works!)

Thanks for the plug... Black dragon scale shields

Very ambitious, looking forward to your progress on these. Nice idea with the lion cloaks, would take forever sculpting those yourself.

I hope this isn't considered bad form given it's been a while since the last update, but these are such impressive conversions I had to sign up and comment. Honestly I'd discounted the AoW Berserkers kit as I thought they looked a tad derpy, but it's incredible how good they look and how well they fit the theme with added GW helmets and your sculpted detailing. Indeed, so good that I've rather forgotten to go to sleep as I've been writing rules for a Norse Dwarf Mordheim warband since yesterday evening

Well - I hope it's not a problem posting back in this thread for so long - I can't believe it's been 4 years...

As you could guess - the more "recent" conversions didn't materialise as my time for hobbies moved into greenwood work. However I have never forgotten about my love for dwarfs and this forum - so I hope everyone is keeping well.

To that end, part of why I'm posting is that I'm currently retraining in Computer Arts - exploring digital painting etc. and dwarfs recently have been where I've been throwing my creative endeavours and thought you'd guys would like to see - so to that end - here's my most recent piece. 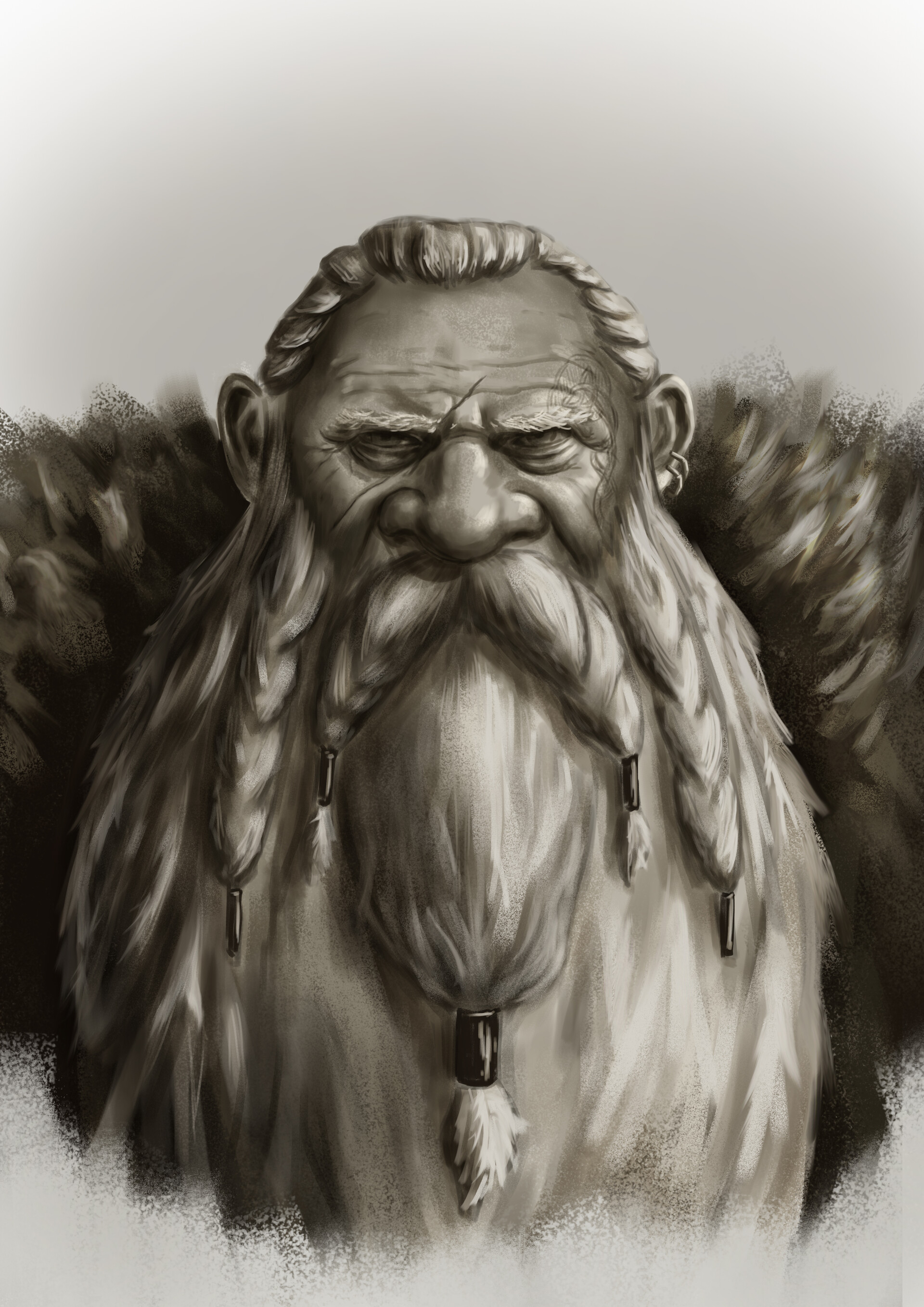 I hope you like him - it felt like something you'd all enjoy. From time to time I'll be posting more dwarfs on my Instagram - https://www.instagra...m/alexjwoodart/ - (which is exclusively what I have there currently) amongst other art from my studies.

But as I say - I hope you're all well and keeping your tankards full!

Also tagged with one or more of these keywords: norse dwarf, greenstuff, sculpting