64 replies to this topic

Those are awesome, you are killing it. I NEED the exact instructions how you painted your cannon

, please. I had two of mine siting on my Table for nearly two years since I can`t paind wood grain if my life depended on it . And how did you achieve the nice , smooth , matt finish on the Metal Parts of your cannon?

Those are awesome, you are killing it. I NEED the exact instructions how you painted your cannon

, please. I had two of mine siting on my Table for nearly two years since I can`t paind wood grain if my life depended on it . And how did you achieve the nice , smooth , matt finish on the Metal Parts of your cannon?

Thanks! Will do my Organ Gun as a tutorial then.

So I finished a hill and two pine forests (with removable trees for playability):

(Dwarfs on hill and tower for scale purpose)

Hey, is Karak Und the same as Kraz Und in the new book? Kraz Und is an unknown to me dwarf outpost along the High Pass near Kislev.

Another great project I've somehow missed and failed to comment on.

Next thing up will be an Organ Gun.

Army painter snow. This what I wrote on an other forum to explain how:

I tried something 'new'. First put some PVA glue on a mixing tray. I actually used hobby vinyl glue (made for kids to fidle with) instead of GW pva (which I use for basing models) or Bison pva (which I use for making scenery). It is a bit more liquid (more like yoghurt, maybe even a bit more fluid than that). Anyway, next I add some Armypainter's snow flock to the glue. Instead of GW snow flock which is more like white static grass, armypainter's flock is more like white sand. I just sprinkle the snow flock over the glue and then mix them together in the tray. Keep adding flock (a bit at a time) so the mix begins to thicken. Don't make it too thick though. That's the reason why I didn't use Bison PVA. Bison PVA is a very strong PVA (which is much stronger and dries much faster than the hobby vinyl glue, so great for making scenery) and when I tried it with Bison it immediately ended up too thick. It immediately formed clumps. That's not what you want. You want to find that mix that keeps it liquid enough to be able to apply it with a brush, but with as much flock in the mix so there's a grain in it. Now apply it with a brush. First use a bigger brush to apply as much and as fast as possible and use smaller brushes where you need to (try to push it with your brush if needed, don't only rely on 'painting' it on). As the mix is now thicker than yoghurt, it won't look flat and actually already looks quite good. Then I sprinkled some extra snow flock on top of it. Now let it dry. If you want to you can now built up layers (to further remove the flat look of snow used on scenery and miniatures that is often seen), but most important thing: make sure the previous layer has completely dried, as otherwise the new layer will break down the previous one. The vinyl glue has a drying time of a couple of hours. This will mean you'll probably only do one layer each day, but has the advantage that if you applied the mix somewhere and think by yourself "damn that does look out of place at that place" you can just wipe it of with a clean brush. I for example also applied the mix on top of the embattlements, and it just looked plain stupid (I guess the wind would blow it away) so I just wiped it off.

Has been a while since I posted an update (Organ Gun finished), so here's how my 3th generation Dwarf Army of 5thE and 6thE models looks so far:

(close-ups as soon as possible) 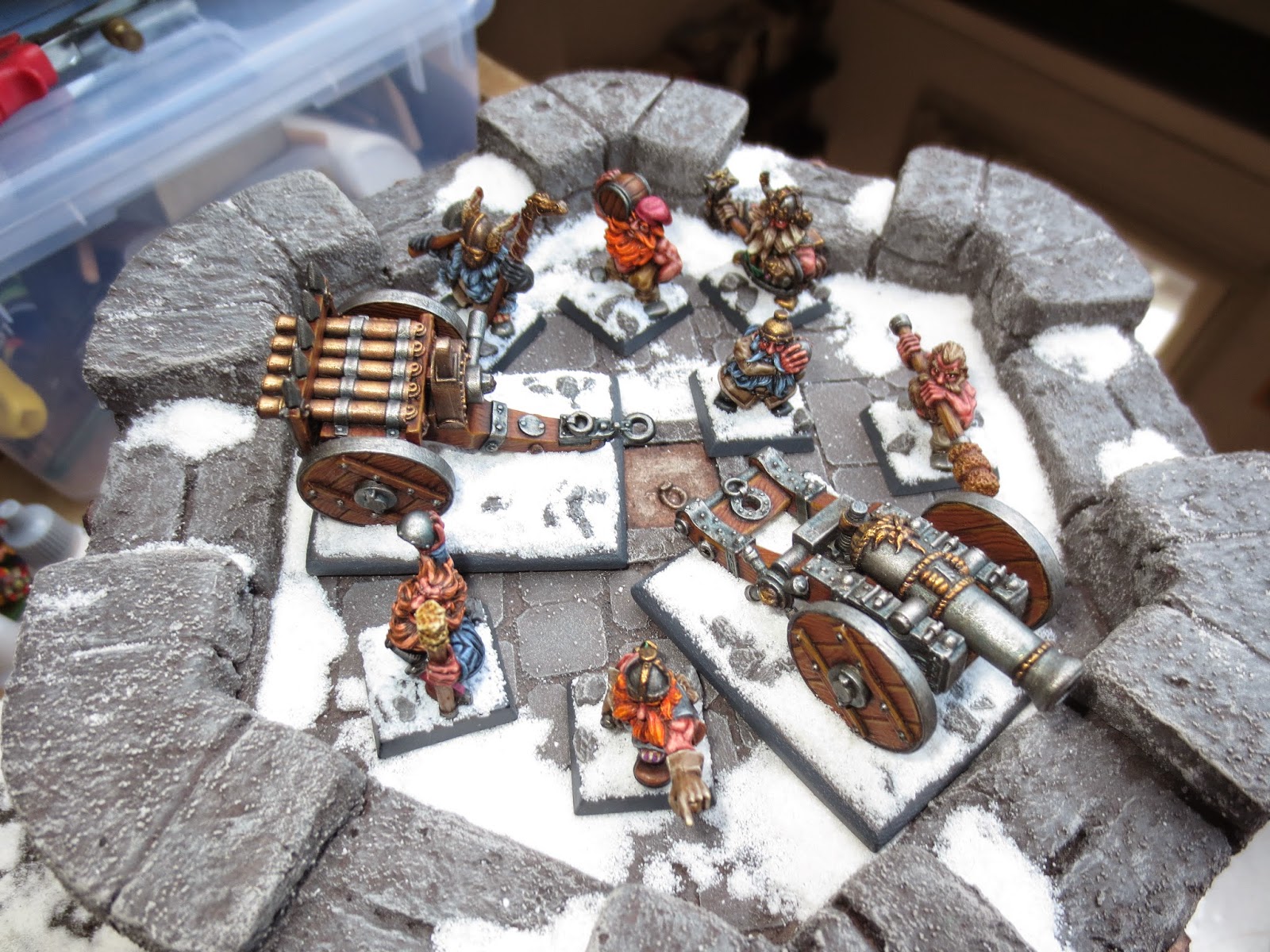 Really like your skin tones! Always visioned dwarfs with a little darker and redder skin tones.

Very, very nice!  I like the wood tones myself.  But the guns & guys need some "dirtying up!" Black powder is DIRTY!!

This is such an inspirational piece of terrain!!

I love the use of the foam, especially the way you can 'press' texture into it.

I won't add blackpowder to artillery crew as I may only ruïn the models instead of leveling them up.

I will add some close-ups of my Dwarfs as soon as possible. Now my Hammerers are up for painting!

So here's a WIP pic of my Hammerers: 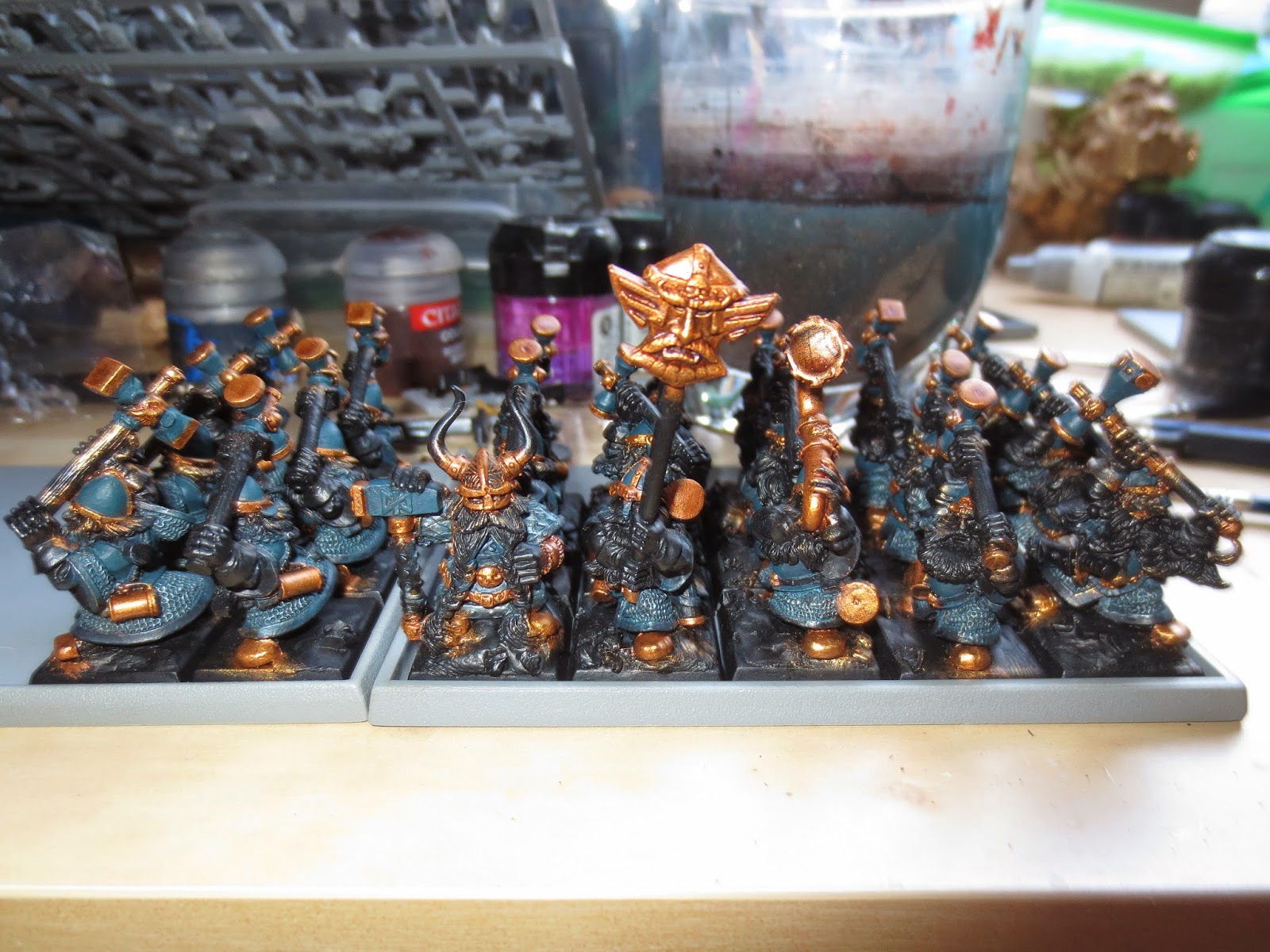 Don't know if it already give you guys a clue of how they will turn out.

Totally missed this plog, how silly of me! May I ask how you achieved them wood tones as well as the rather unusual skin?

Nice work Yorri, I really like the contrast on the beards and skin.

Good luck with the Hammerers.