64 replies to this topic

I play WHF since 1999. Late 5th edition that was. I (for obvious reasons) chose Dwarfs as my first army. Since then I have been collecting Dwarfs till begin 7th edition (so apparently didn't miss any new armybook or models :-p ). Halfway through 7th edition I stopped playing the game as the gaming club I go to is more a 40k club. WHF I actually played in a different gaming club, and when I didn't have the time to attend to their gaming afternoons I simply also stopped playing WHF.

But now I'm back to WHF. Don't know yet if my Dwarfs will see many battles, but I'm planning to paint an entire new Dwarf army this year (or this may actually be a two-year project) as well as build me some suitable terrain.

With 'new' I mean painting models that haven't seen paint yet. It doesn't mean you'll see only new models. Actually the first thing that is on my painting table is an old Dwarf Cannon (5th edition, though many 6th edition Dwarfs will remember this one as well). It was actually my first metal model(s) I ever bought from GW. For some reason I never got to painting it.

Any way, no paint yet, but here are some pics of my first piece of terrain, a Dwarf Watchtower/outpost: 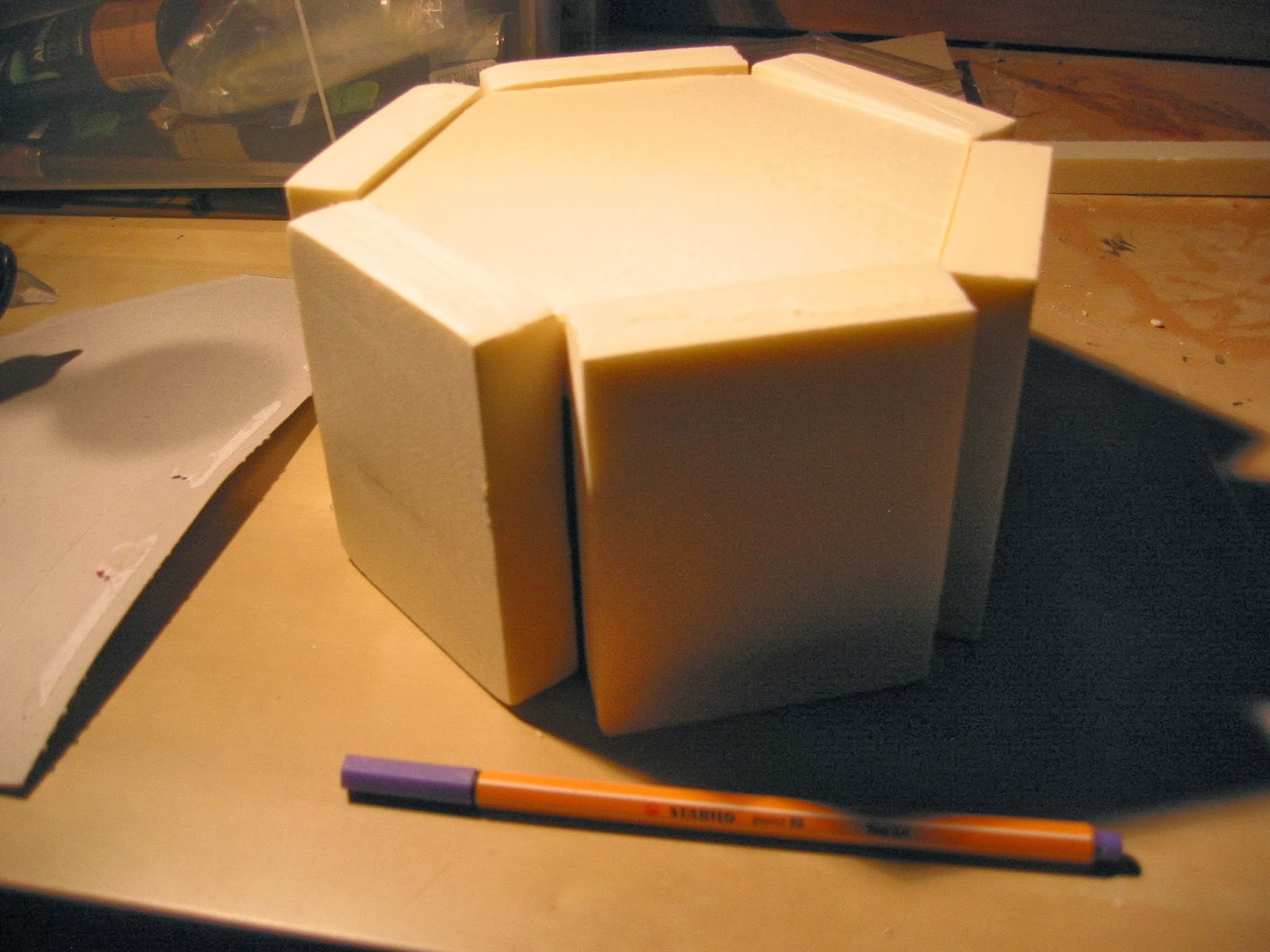 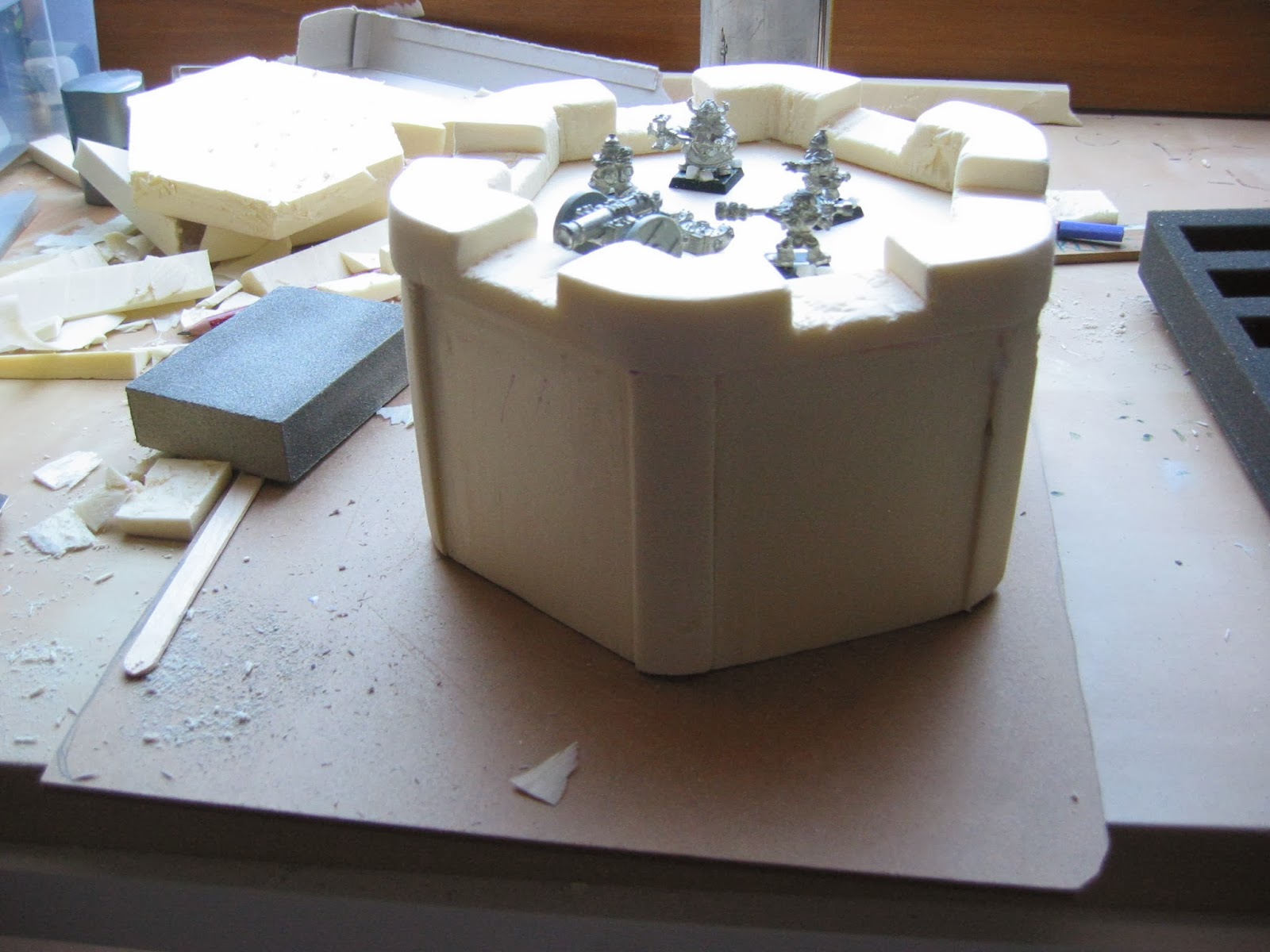 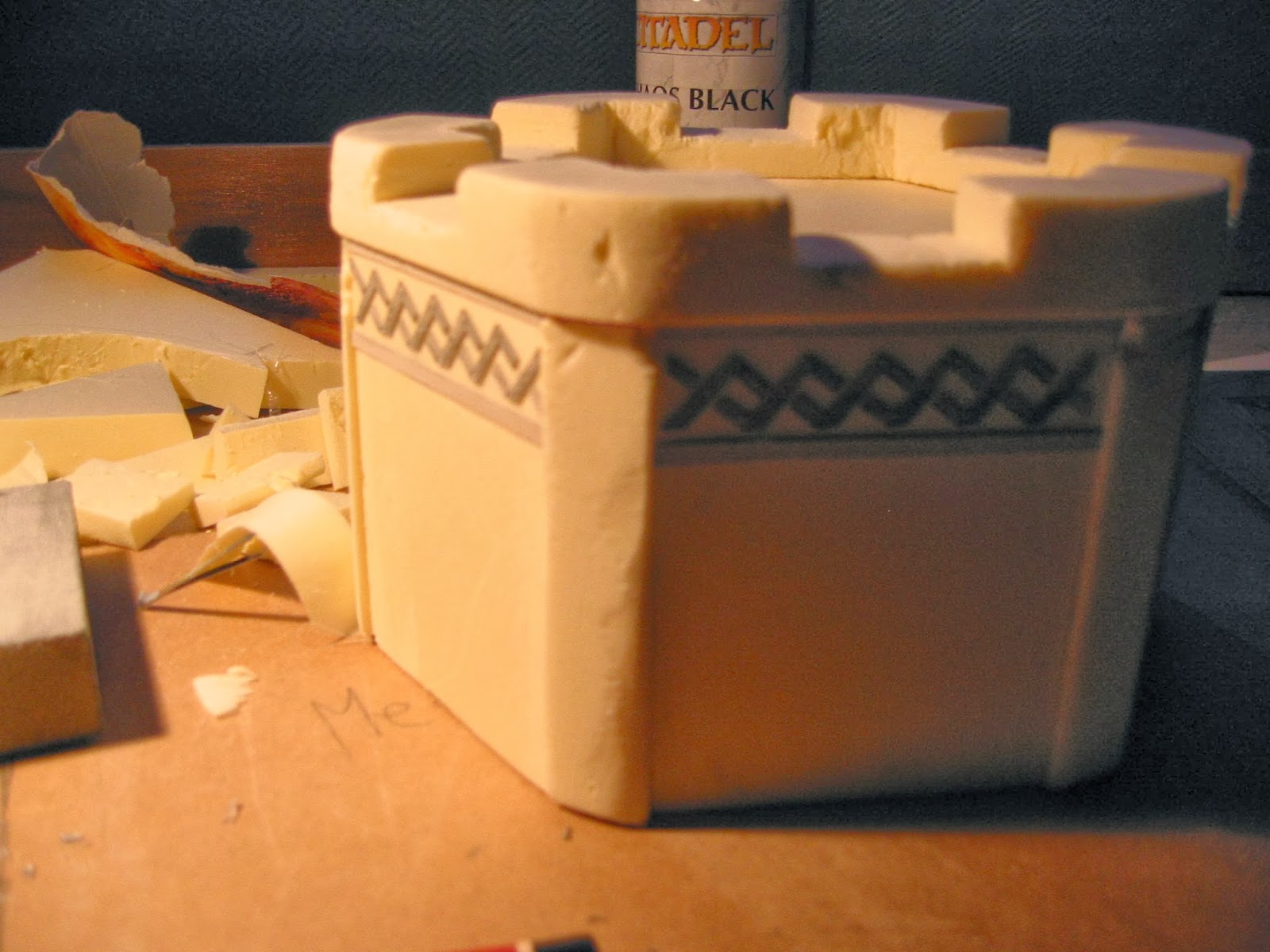 WIP 4: first 'rockwork' (on other side, though all sides have got details and rocks) 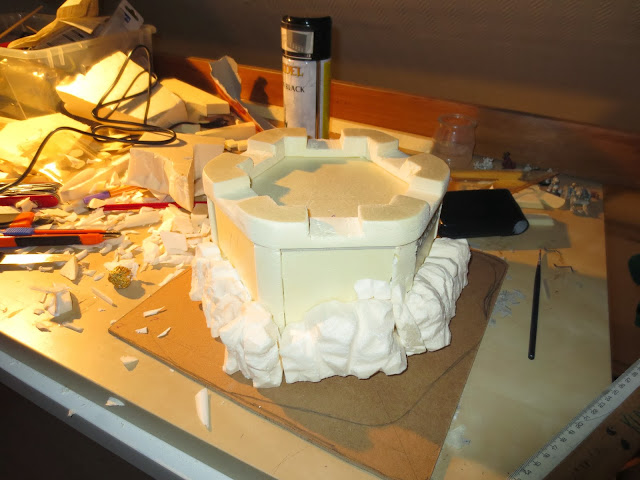 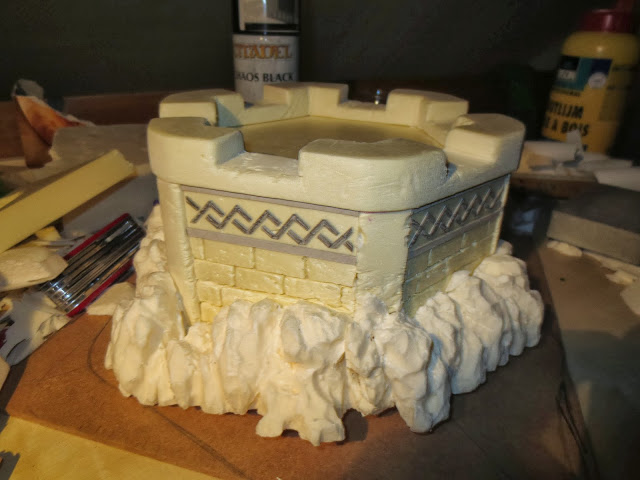 WIP 6: start on the door 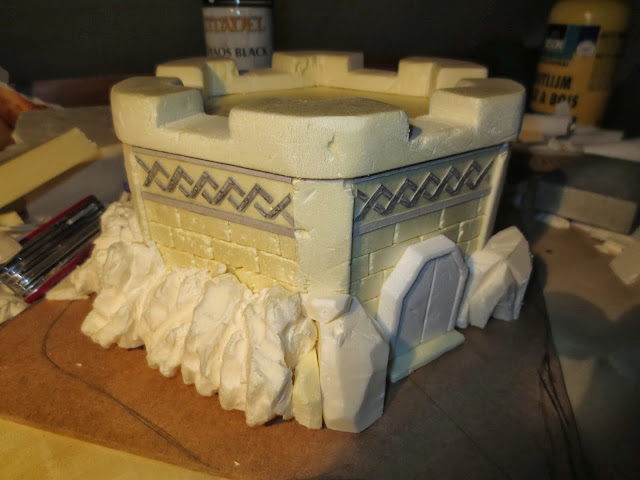 WIP 7: more or less finished (still need to fill some gaps in the rocks) 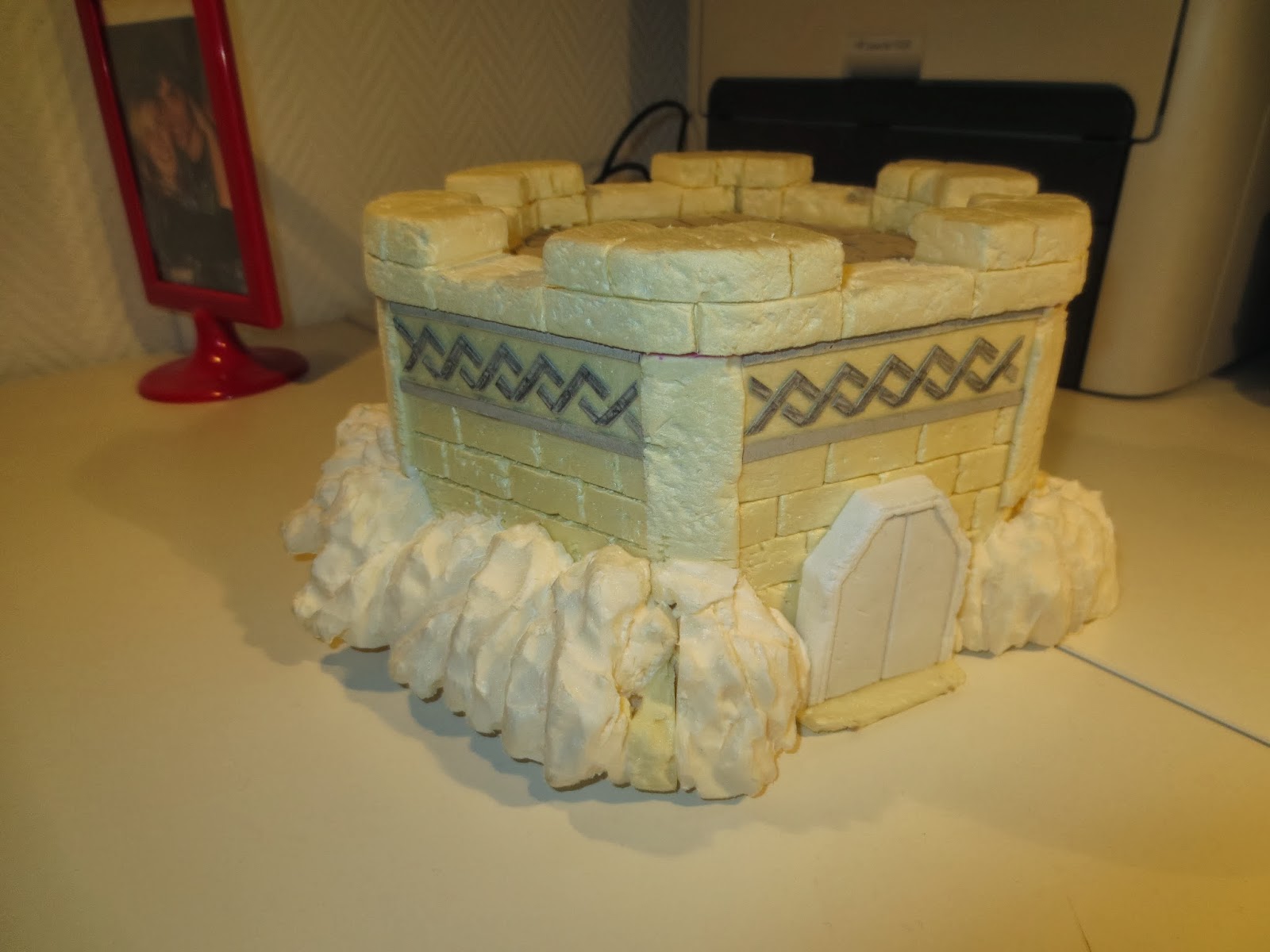 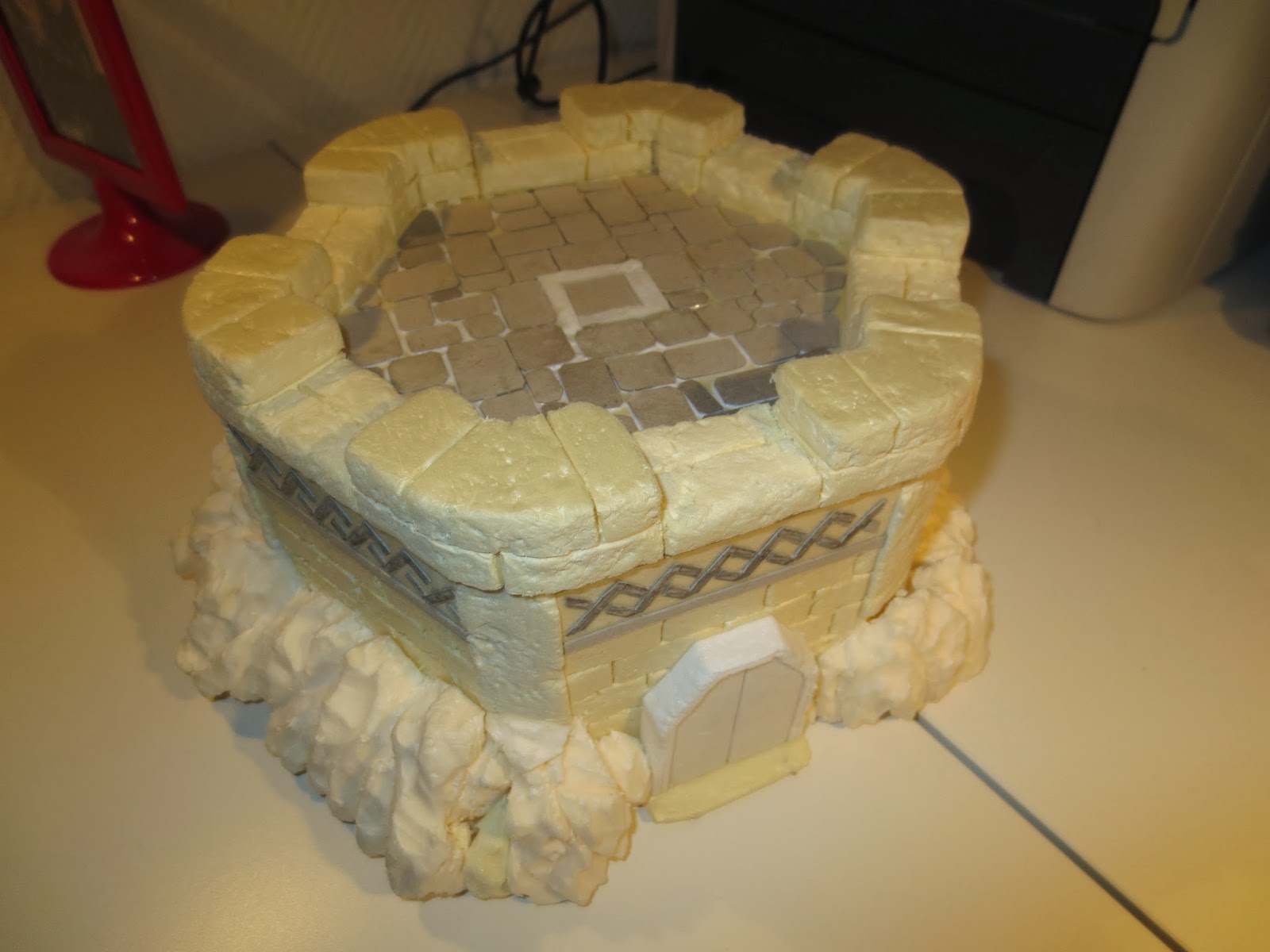 What left to do: well I have already put the piece on a mdf base and added a handle to the hatchway. Right now I only need a handle for the door (or two) and find me some shields to add to corners. And then the paint and flock process can start. ;-)

That is a ripper tower love it

Great job! What did you use for the braiding design?

Very good work... can not wait to see the finished product...  and yes how did you do the braiding design?

Very cool! So, are you making this out of styrophome?

fantastic work, and I love the "each different stage" pictures.

The tower itself is entirely made of 2cm thick 'styrofoam' (= polystyrene panels for isolation use). Mine is yellow, but I guess it's blue or pink in other countries.

The rocks are made of cream coloured styrofoam that is about 5cm thick. This styrofoam has an even higher density than the yellow ones.

The hatchway borders and door are made of 1cm thick foamboard, but with the paper removed. I had some leftover pieces of this from an other project and without the paper on its sides it is actually just thin foam.

For the braiding design and the floor I used cardboard. I drew the design with a pencil on a piece of cardboard and then used some scissors to cut it out. For long straight lines a hobby knife and a ruler are the better choice though.

And last but not least, for the base I have made I used mdf.

Hope this answers all questions on materials used.

Very nice clean lines on the braiding. Looking forward to seeing it painted.

For the door handle:

Just remove the base, and you've got a hatch lock.

I liked your pebble stone roof so much that I copied it for my Dwarf Gate.

This looks absolutely stunning.
How did you shape the rocks on the sides?

fantastic! don't stop until you make a whole stronghold!

So I finally finshed my Watchtower. I hope you guys like it (I have added all 7 different angles): 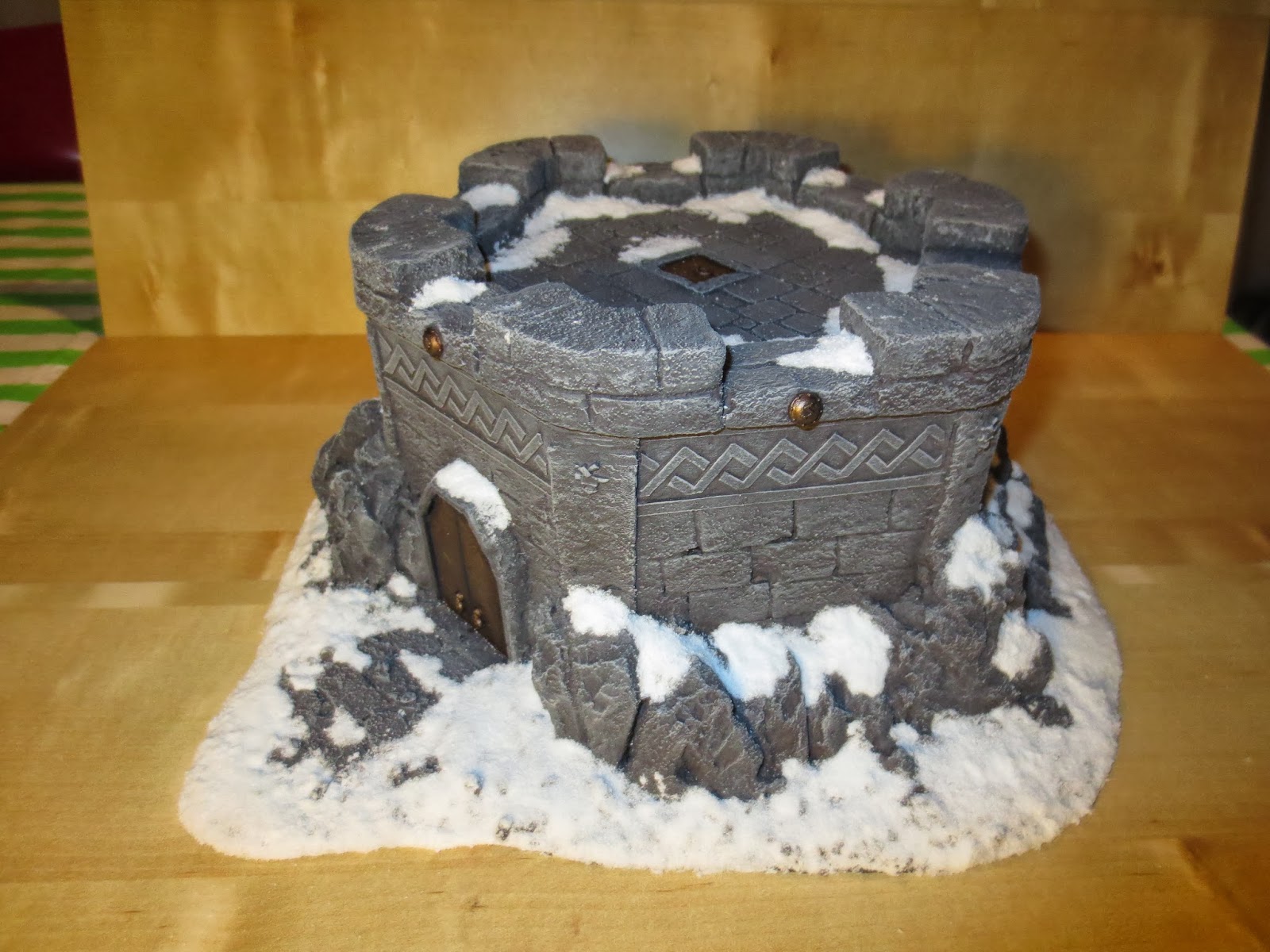 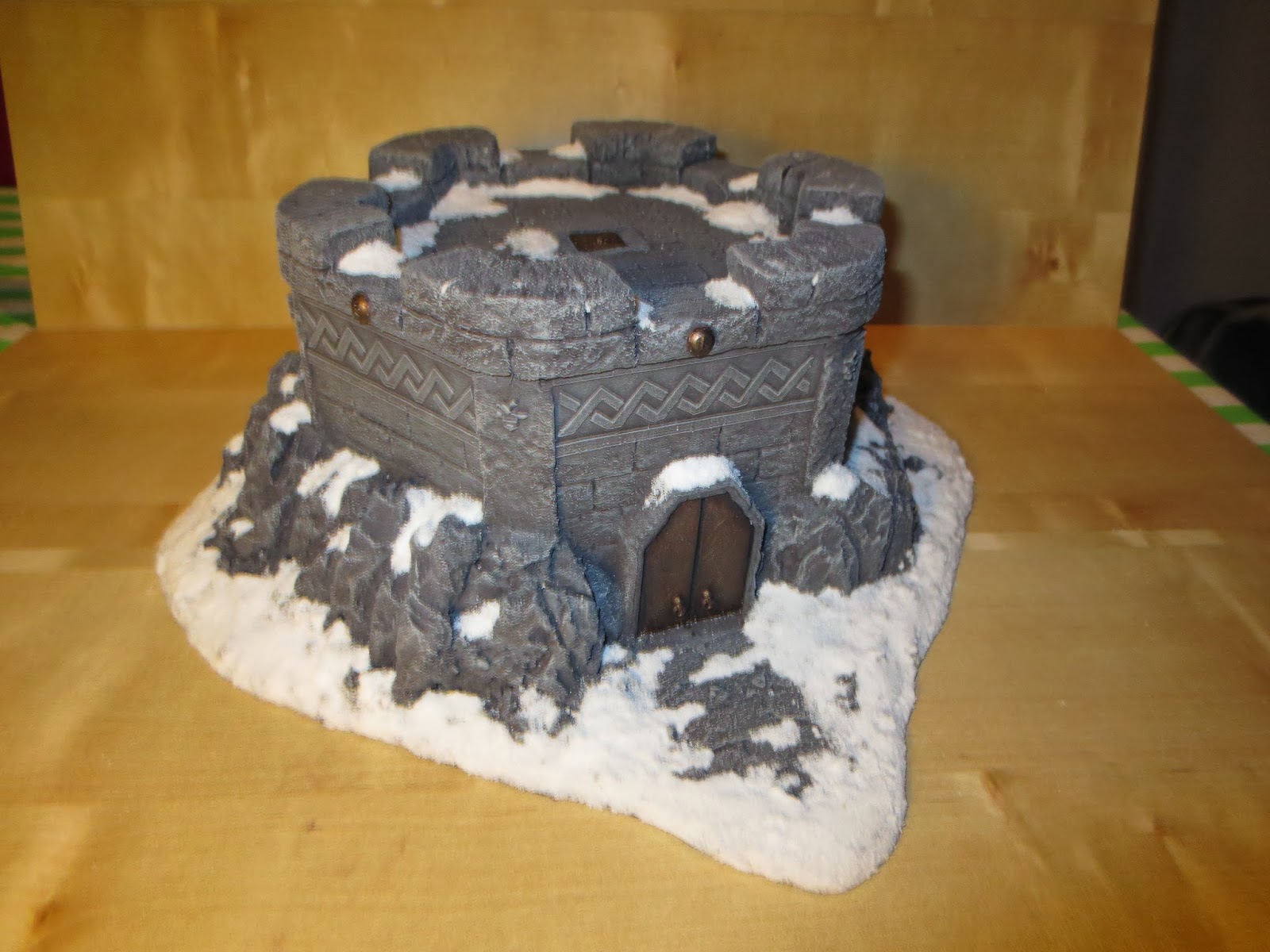 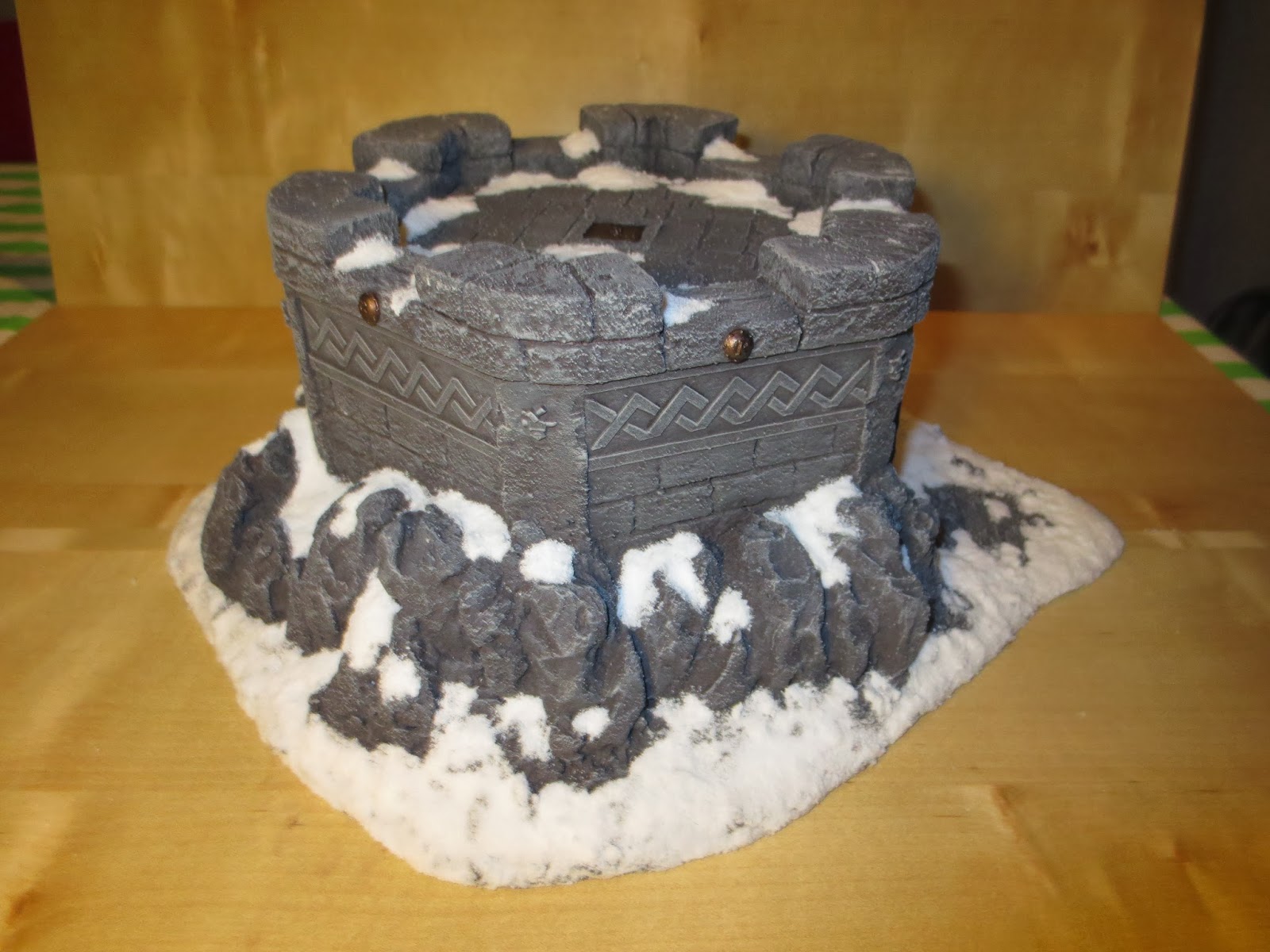 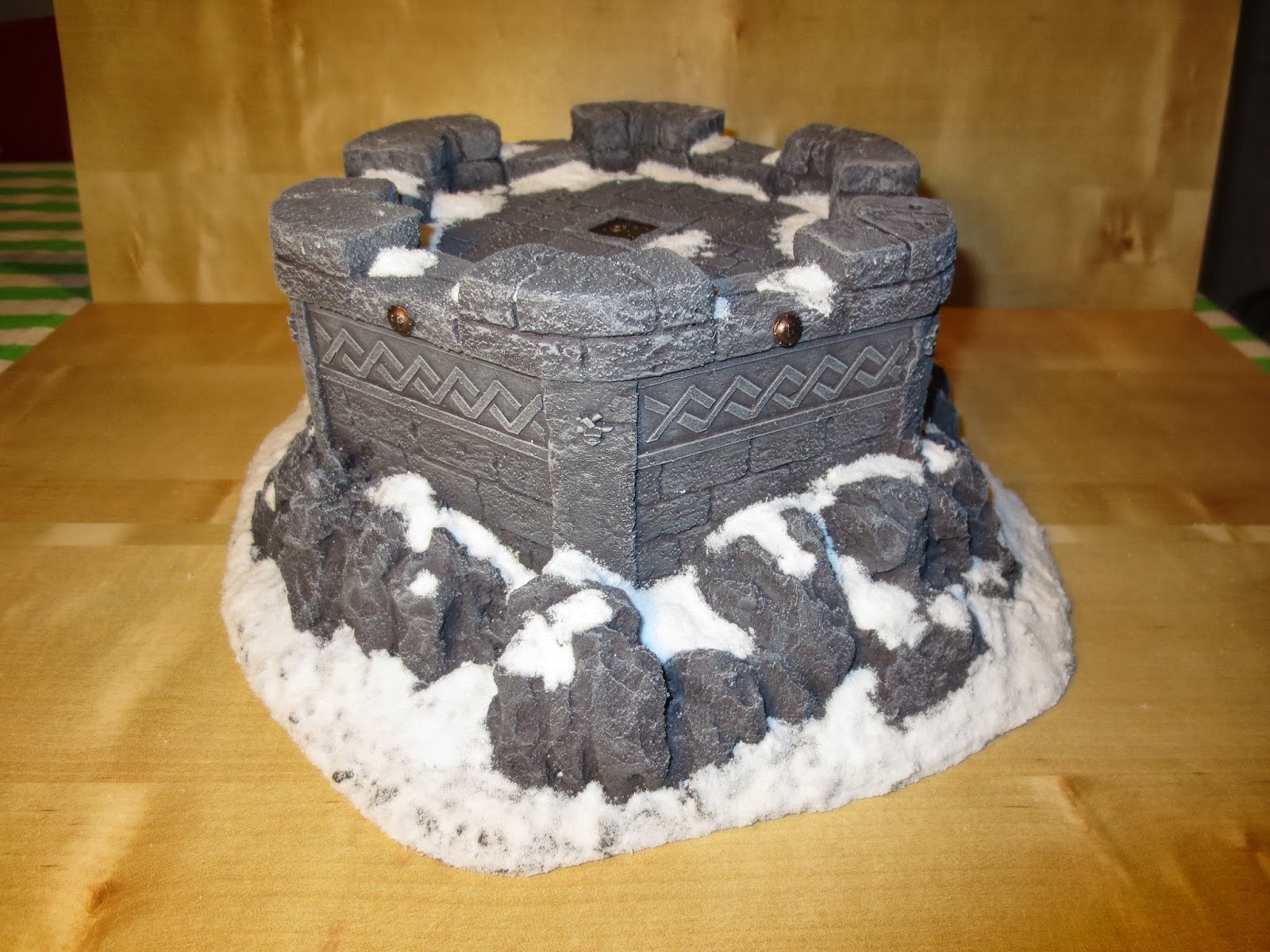 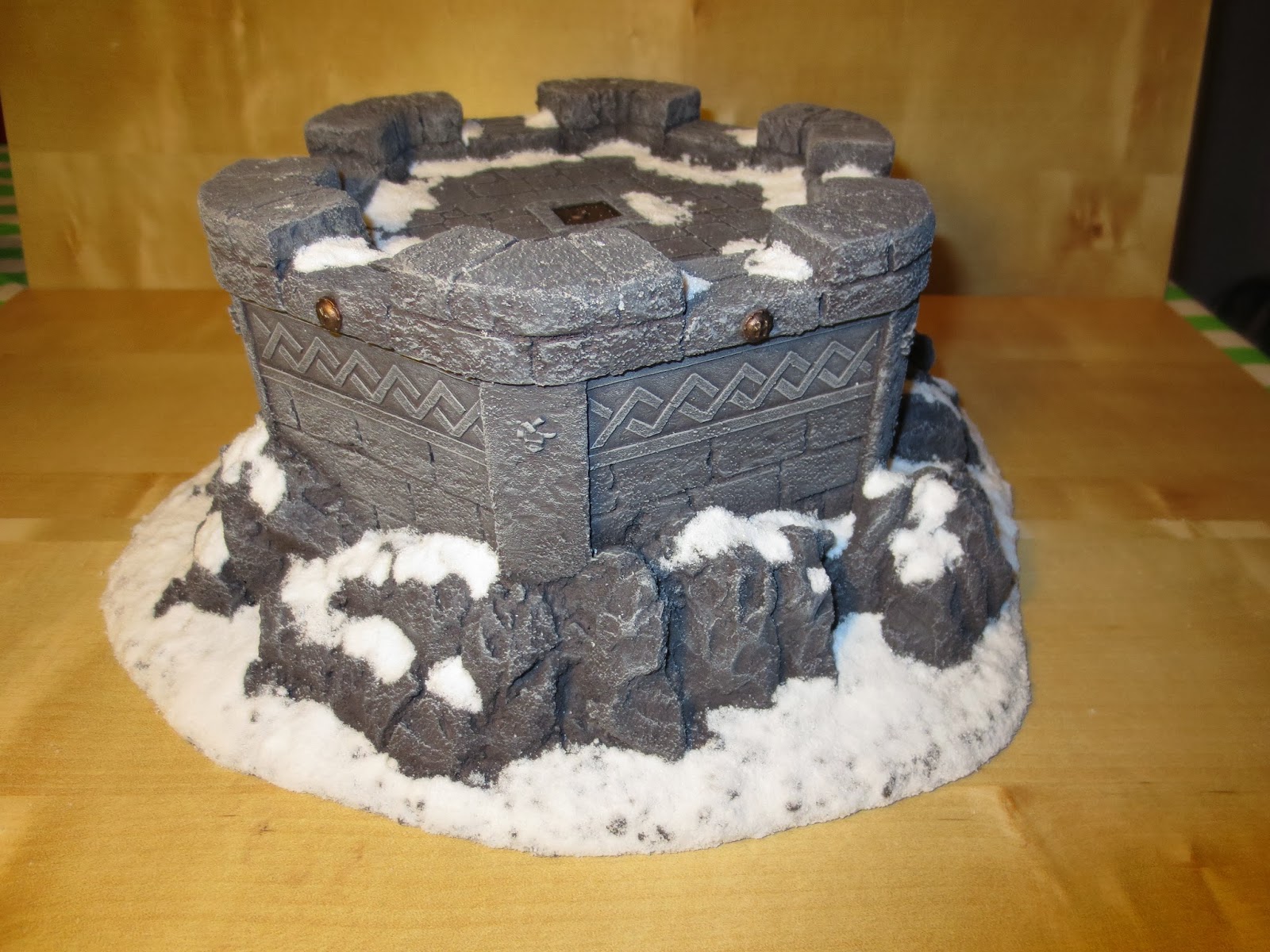 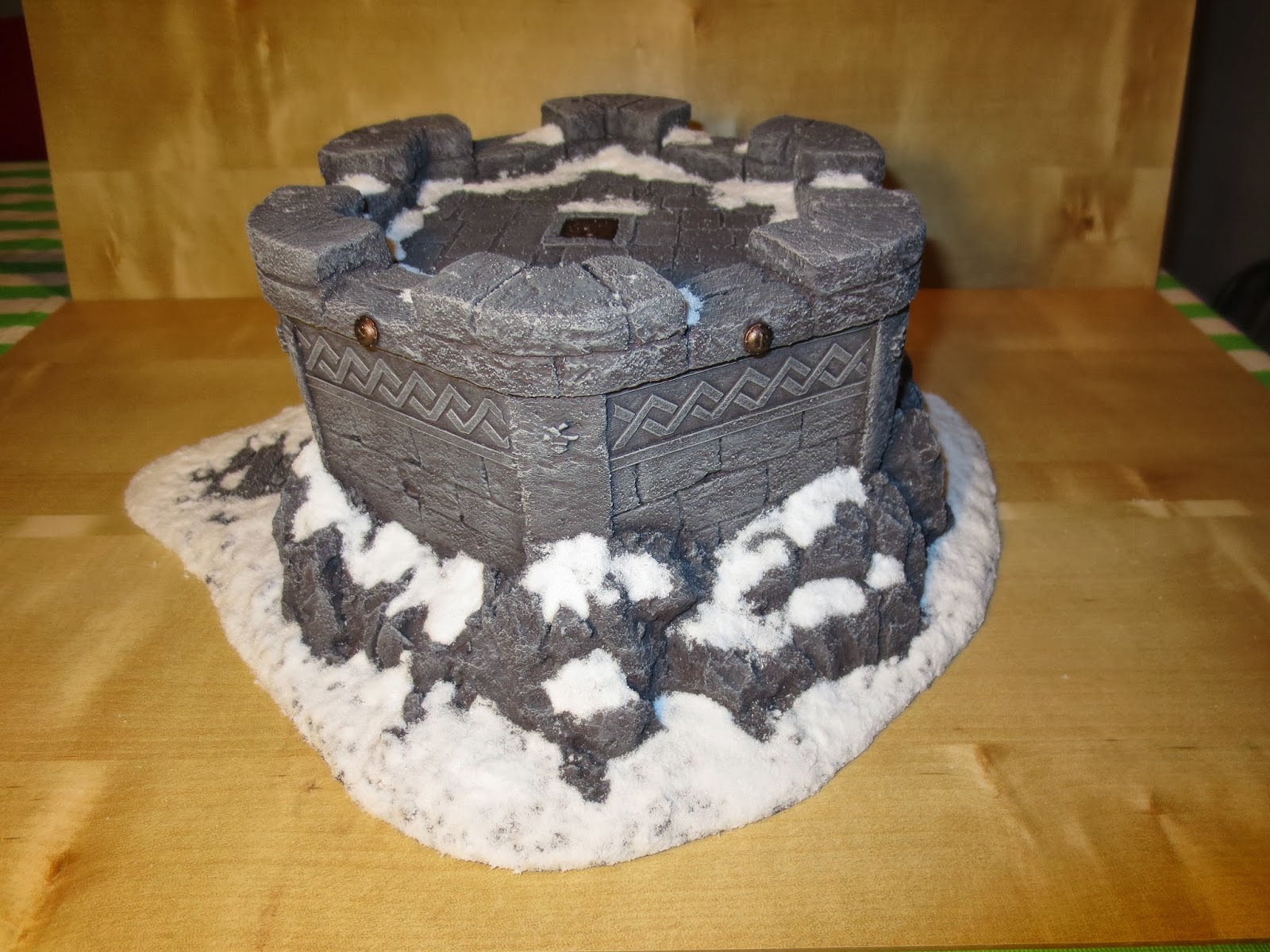 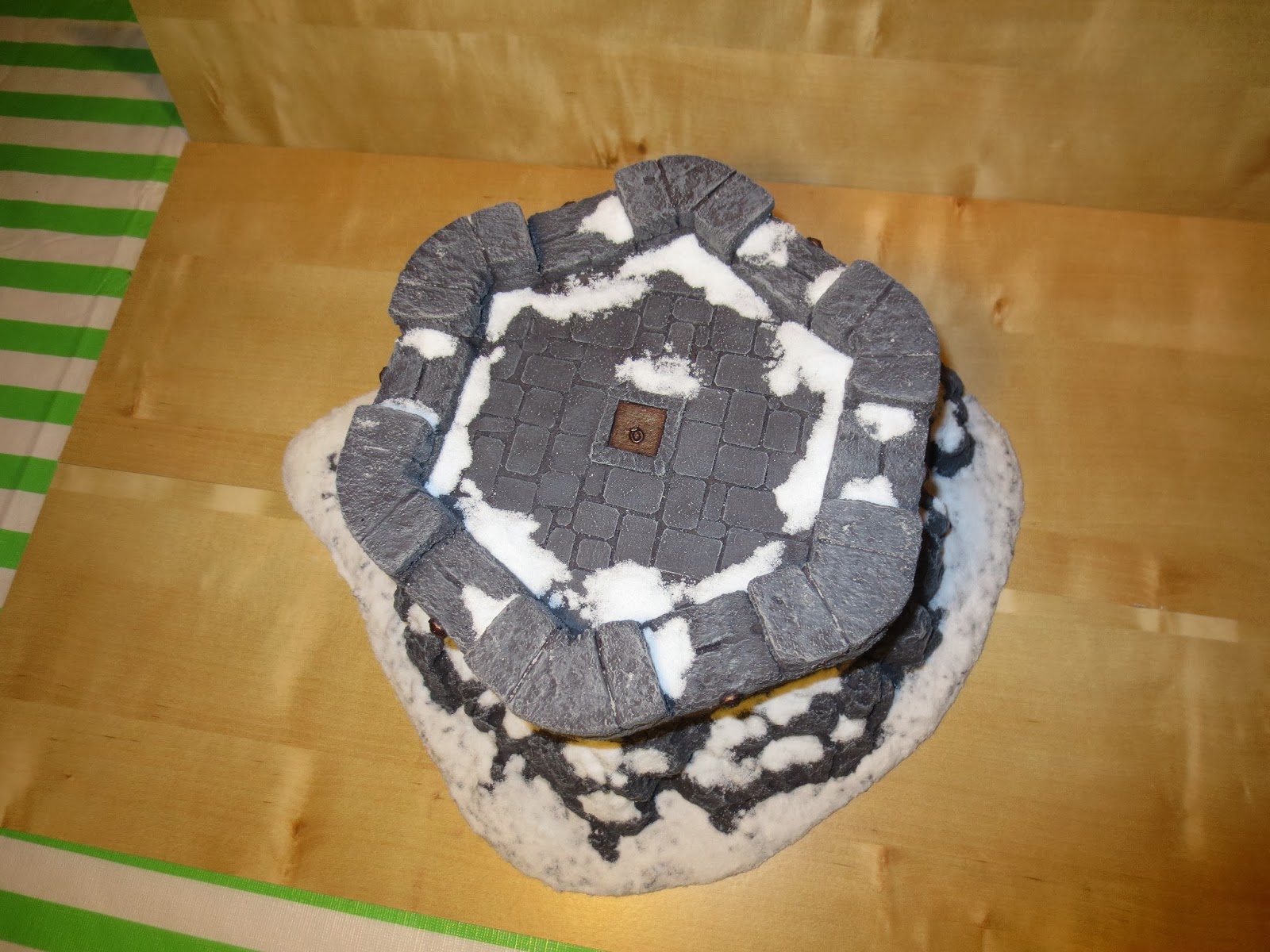 That an awesome Terrain Piece friend, something to be proud of

Awesome! I hope to copy you eventually